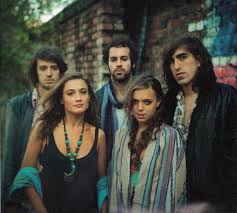 Crystal Fighters – Everything Is My Family

The eclectic and worldly electro-folk group Crystal Fighters have officially released their third album, Everything Is My Family. The London-based band has gone through many metamorphoses since their inception in 2010, and the new album is as much a show of their strengths as it is a testament to their history.

Crystal Fighters have become known for their fusion of styles, specifically the traditional and Latin style sounds that influence their music. They have taken inspiration from everywhere from the Canary Islands to South America, have joined the sounds of the world together to create something new.

Everything is my Family unconventionally starts with the dialogue of a man speaking about spirituality, life, and letting go. It’s the only kind of audio that would have served as an introduction to the album as a whole, already creating the spirit of wisdom and experience, something that shows up later in the more “tropical” tracks, whether intentional or not. In any case, the all-important tone has been set in this moment.

Crystal Fighters kick things off with “Yellow Sun,” an immediate stand-out that combines summer-soaked nostalgia with beachy drums and maybe even a little ukulele. The sing-along harmonies encapsulate the careless ideal of the song: “dancing in the yellow sun.” This song is brilliantly placed at the beginning of the album, because it is nearly guaranteed to suck the listener in with its emotional and melodic complexity.

The island-living soundscape theme continues straight into “Good Girls,” with the group utilizing the Caribbean-style steel drum masterfully adhering with an indie rock overlay. This is the pinnacle of that previously mentioned genre-fusion, and it might be the closest thing to “electro-folk” that we get. It’s already clear that Crystal Fighters break boundaries, and it seems almost unfair to categorize them in any one way.

To that note, almost as if they were in danger of fitting into a genre, “Good Girls” is followed by “In Your Arms,” following more of a house/dance tradition than anything. It still produces the strong vocal and lyrical qualities that are seen throughout the album, but “In Your Arms” shies away from the coastal feeling. From here on out, anything is fair game.

As a whole, the album gradually becomes more folk-oriented. Still, the strength is in the upbeat first half, where the Crystal Fighters style is able to really shine.

Another standout track based on originality is “All Night,” a return to the traditional style with an emphasis on drums and vocal chanting. The band have said they frequently use Basque instruments, part of a musical style that comes from the region of Spain which uses strong percussion. Crystal Fighters have their own tribal take on the sound, adding their own flair.

While we hear nods to the overarching themes of life, love, and fate in songs like “The Moondog,” it is all summarized in “Lay Low,” which serves as the conclusion of Everything Is My Family in the most fitting way.

The band left this message about the song: “This is a new song dedicated to all of our family, friends, and supporters along the way, but specifically for Andrea, our old drummer who passed away. The song is a reminder of how momentary and magical this life is, and to appreciate the beauty in all things and relationships…”

While “Lay Low” references the tragic death of their former drummer Andrea Marongiu, it maintains a message of hope and positivity. It’s about making the most of your time in the world, and enjoying it while you can.

“Lay Low” is a perfect summary of all that Crystal Fighters’ music stands for. With Everything Is My Family, they have created a positive force that is also full of addicting melodies as an added benefit.

Crystal Fighters are currently on tour across Europe to promote the new album.