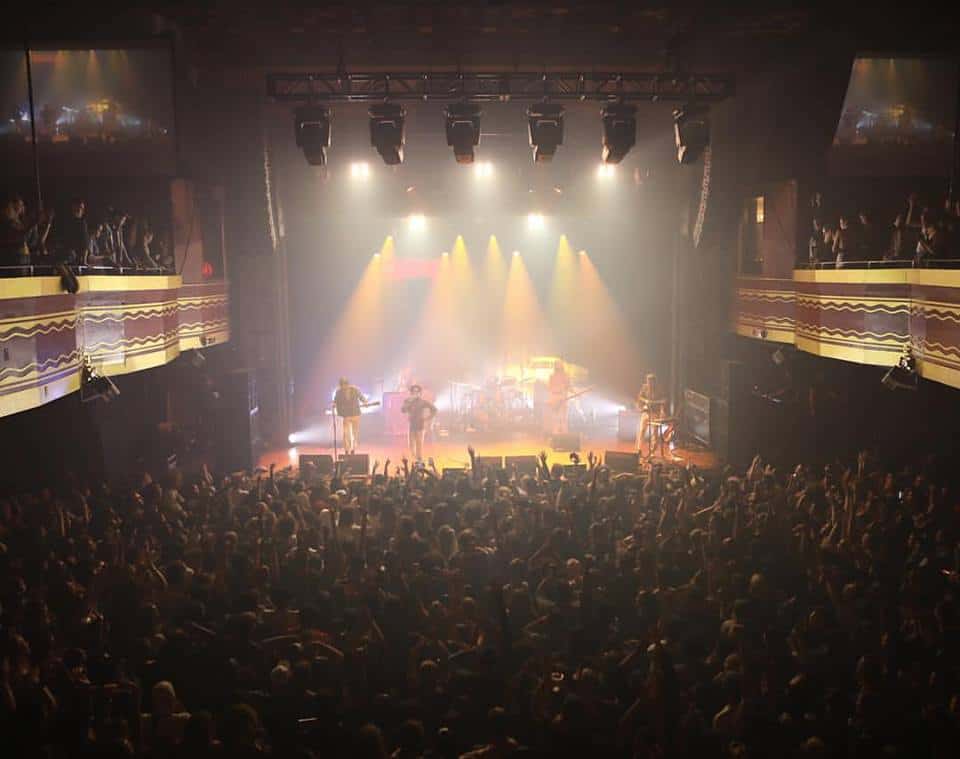 It was September 30th, the night City Club, The Growlers’ fifth album, released. Thirty minutes had gone by since the doors opened and the line was still long and unmoving—a sold out show at Webster Hall. The pit/dance-floor was sure to be jam-packed and really, really sweaty.

The openers were the Brooklyn-based Cut Worms. Decked out in cowboy hats and rural button down shirts, they swathed the venue in good, old-fashioned southern twang. It seemed that nobody had heard of these guys until then—unless if they were at The Growlers’ show in Williamsburg the night before. One attendee shouted out “Who are you?!” since the band hadn’t introduced themselves. It didn’t take long, however, to make fans out of everyone within earshot. With their laid-back country swagger—complete with a lap steel guitar—they quickly made an impression. Sadly, there isn’t much to find online, but they certainly are a band to keep an eye on.

Everyone in the audience presumed that The Growlers were coming up next, but they were in for quite the surprise. Brooks Nielsen, the lead singer of said band, walked onstage to introduce the next act: Cher. That’s right—in all her show-stopping glory, (a drag queen who goes by the name of) Cher brought the house down with her greatest hits.

What felt like twenty minutes had passed after Cher left the stage. The crowd was getting antsy. Mere moments away from a restless riot breaking out, The Growlers appeared. According to Brooks, there were still people outside waiting and they postponed the show to give everyone a chance to get in. How thoughtful, how incredibly sweet.

The opening chords of “Big Toe,” from their 2014 record Chinese Fountain, started the show, which in turn started a frenetic version of moshing. Going into this concert, this unsuspecting reviewer had no idea how the night was going to unfold. Generally speaking, The Growlers’ repertoire is mellow, chill, relatively un-moshy. Boy, let me tell you: there have been punk shows that were less aggressive than this.

Whereas punk crowds usually have this sense of unity—where everyone there is moshing together in an unspoken bond, shoving and pushing each other out of a weird form of brotherly-and-sisterly love—this ragtag bunch of people had no consideration for their fellow concert-goers. Even the crowd-surfers were getting unfair treatment. More often than not, someone would grab the leg of a surfer and forcibly flip them over. It was as if these people were more interested in making a half-hearted statement of rebellion than enjoy a typically communal event.

Never mind the strange and unclear intentions of this unruly few. The Growlers remained unaffected. Oddly uncharismatic, they played their songs with almost stoic professionalism. Instead of resorting to attention-grabbing antics, they let their songs speak for themselves, and for good reason. Their performance was tight, to the point, and it sounded fantastic. Granted, they skipped over a few of their fan favorites (specifically “Love Test”) but that was no cause for alarm. It was a great, long setlist made for live performances. Even the new songs from City Club were lively (which is more than one could say about the studio versions).