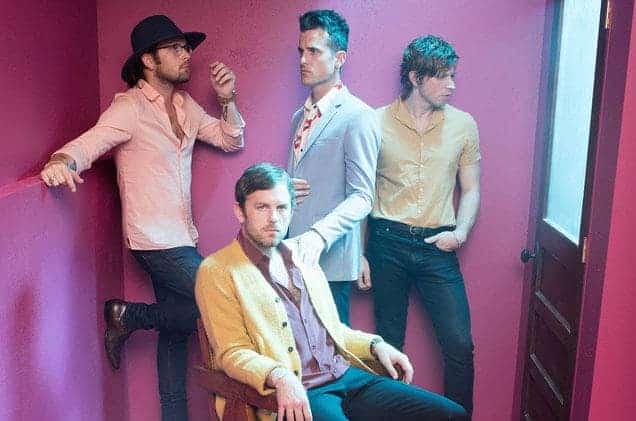 Kings of Leon – Waste A Moment

Tennessee rockers Kings of Leon make their triumphant return with “Waste A Moment,” the first cut from new album Walls which is rumored to fit their five syllable theme by standing for We Are Like Love Songs. Walls, due for release on October 14th, was recorded in LA with Coldplay and Arcade Fire producer Markus Dravs and takes the band in a more contemporary direction as opposed to the alternative sound we are used to.

The music video follows three cheerleaders in a nice neighborhood that appears to follow anything but the suburban stereotype.  Police drop dead for no apparent reason, band members are blindfolded; a suspicious pony tail clad man wields what looks like the memory eraser from Men in Black and this is all centered around a crime scene in which we aren’t entirely sure what crime took place.  Needless to say, there’s a lot going on and not a lot of it seems to make much sense.  The imagery connects the surreal with the mundane creating this conflicting scenario for the video.

These eerie events are accentuated by the driving electric guitars in the background as well as the solid bass groove that introduces the song.  Caleb Followill’s familiar unique vocals guide us throughout the video accompanied by backing vocals that add just the right amount of depth to the chorus.  Throughout the video most of the members of Kings of Leon are blindfolded suggesting that they remain unseen by the major players creating an air of mystery to this already mystifying plot.  Perhaps it’s a portrayal of the many facets of a suburban lifestyle reminding us that although something or someone may look pleasant on the outside there’s always room to hide a demon or two.  What’s nice is that the video provokes thought and is open to interpretation; what do you think it’s about?