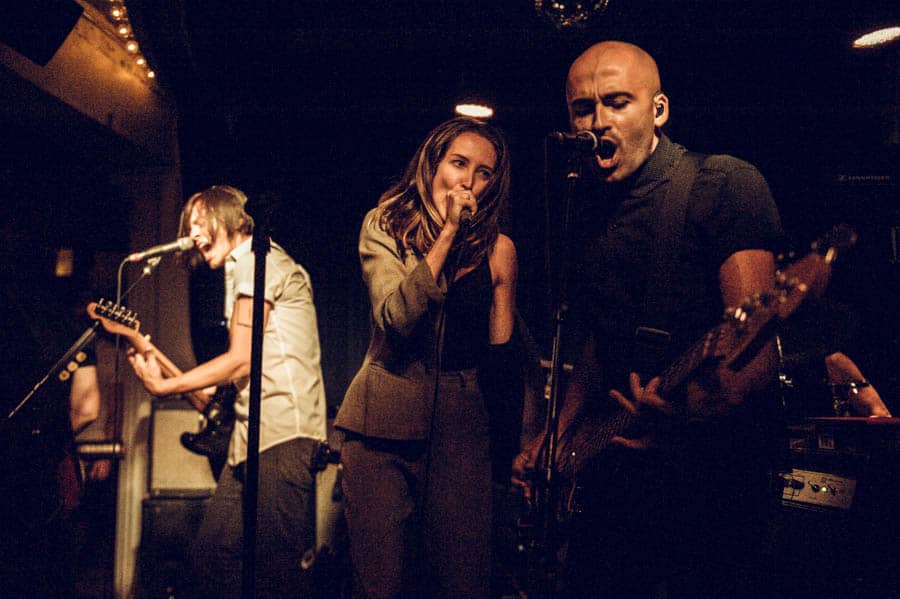 Touch, the second album from Toronto band July Talk following their 2012 self-titled debut, is officially released today. This album is like a collection of different kinds of human interactions; real, fake, good, bad and throughout the songs we are given insight into toxic relationships, falling in love, the need for something real, the reveal of something fake, the relationship between a country and its shady past, the analysis of gluttony and the question of when or if we will ever be satisfied. We are introduced to characters and told their stories as we follow first encounters, and lastly we are given a brief and introspective insight into Fay and Dreimanis’ onstage dynamic as they explain how certain things are meant for a spectacle while others aren’t and sometimes they get tired and lonely doing what they do. All of this information can be squeezed out of the ten song sophomore album if you’re actually listening.

Lead singer and guitar player, Peter Dreimanis commented: “Leah and I started to see human touch as this pure thing – this antidote to a world that had become obsessed with mirrors and screens. We became fascinated with that moment where two bodies can actually touch and experience each other honestly.” Therefore, this album and what it represents encourages you to put down your phone, log out of social media, go outside or light some candles put on the album and then talk about it. Make connections with people about what you just experienced together. Go for a drink and hash out your thoughts and feelings on certain songs with a friend. Make those connections and open up even though it’s hard. Touch people with your hands (consensually, of course), your minds, your hearts and establish these important facets of physical, emotional and mental contact no matter how vulnerable and uncomfortable you may feel. Like Peter said, that’s human touch in its purest form.

This album may not be as hard hitting as their last in terms of sound but it satisfies every other aspect in regard to the back and forth between Fay and Dreimanis, the thoughtful lyrics and the overall production quality. In “Now I Know” they experimented a bit with a pop infused introduction before digging their feet in and producing that familiar alternative rock sound while declaring “now I know how it feels to fall in love, and I know it feels like falling apart.” Not to mention the addition of the ballad, “Strange Habit” mixing in a slow, dreamy, intuitive song about a sex-driven relationship. These experimental expressions of creativity are what make July Talk so versatile in their unpredictability. They explore their art and are always trying new things to see what feels right. This meant experimenting with new styles such as: “country tunes, straight-up pop tunes, all kinds of different variations of music that we love,” says bassist Josh Warburton.

While listening I couldn’t help but keep the theme of the album close by as I deconstructed every song, wrote down the lyrics as I heard them, mulled it over and thought about what was being said. It’s almost as if every song is a unique narrative about disparate interactions with the human body in this pure form and a deconstruction of the senses, in particular, touch, and how physical contact can convey certain thoughts and feelings that are impossible to translate by word of mouth.

“Picturing Love” opens the album and the fast paced musicality reflects the desperate proclamation about how frustrating it is to remove ourselves from these screens, these other personas we endorse and engage in a real, visceral relationships. “Beck + Call” outlines a one sided engagement supported by the shaky foundation of sex and only sex. July Talk spoils us as they provide two character driven tunes entitled “Johnny + Mary” and “Lola + Joseph.” Each story stands alone, whether real or fictional, it doesn’t matter, and we get a front row seat as two strangers meeting for the first time explore the intimacy and attraction they felt for one another. There’s this underlying building tension throughout the song that threatens to explode at the end of the countdown when the song reaches its peak creating an exciting, unpredictable and unique form of storytelling.

The first single off the album, “Push + Pull,” has made waves all across North America reaching the top of the alternative charts. The band approached director Nadia Tan (Bry Webb, Arkells, Ohbijou) when it came time to shoot their music video and she reveals “[Peter] told me it was about Western excess, about our never-ending appetite, about the types of people who consume and consume and don’t know when to stop, about our irrational but constant need for more food, more mind-altering substances, more sex, more ‘likes’, more money, more things,” she said. “I thought it would be interesting to try to capture these themes in the video through raw documentary-style footage showing various groups of people partaking in excess in different ways across North America over the course of one night.” The video now has more than 1 million views on YouTube and ironically people can’t seem to get enough of these Canadian alt-rockers.

The album concludes with “Jesus Said So” and “Touch” two powerful songs with entirely different meanings. “Jesus Said So” is a heavy track that possesses undertones of colonialism and imperialism while highlighting the negative aspects that result in blindly following religion. I’m Canadian and this song, for me, blatantly describes the colonialists’ unfair conquest and horrific treatment of Canada’s indigenous people both in the past and present as well as their portrayal, or lack thereof, in the media. However, although July Talk and I are Canadian this song can be translated onto any nation, culture, movement and it provides an opportunity for those listening to educate themselves on origins and adopt a new point of view.

Lastly, “Touch” rounds off the album on a melancholy note as we are given a brief insight into the inner workings of Fay and Dreimanis’ onstage antics. What they’re doing is art and as fans we shouldn’t expect them to sell their souls to us. They are individuals with their own essence and what they leave on the stage is something else entirely. Of course, there’s a part of them that is real up there but how much?  This just adds to the allure, the raw tenacity and tension they create on the stage.  When their voices combine to sing: “Don’t wanna give myself away too much / Touch / There’s no good way to say goodbye / We got everything to lose, nothing to hide / You gotta give and take, give and take / It’s best to save all you crave for the stage / We get so tired and lonely / We need a human touch” I get the sense they’re learning how to deal with their new found success. Balance and human connections are integral to that process.

July Talk is in Europe for the rest of the month and make their triumphant return to North America for a mammoth string of dates.