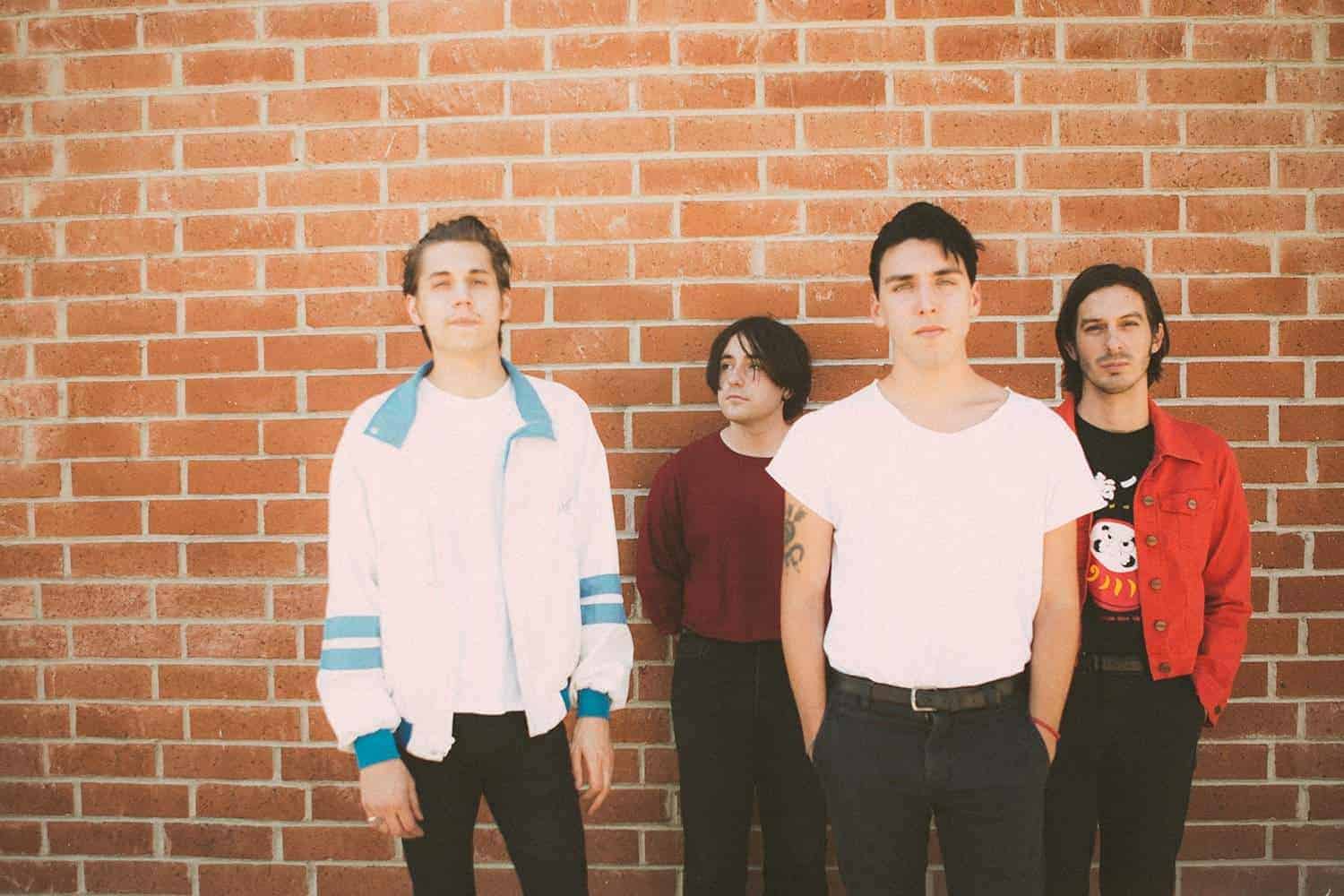 California rockers Bad Suns have released their much anticipated sophomore album, Disappear Here. The follow up to their debut album Language and Perspective, Disappear Here continues the sun soaked, guitar-driven rock sound of their debut. Vocalist, Christo Bowman, cites The Cure, The Clash, and Elvis Costello as lead influences while songwriting. By combining their influences into a more modern rock, their latest release delivers a number of upbeat, slightly cheerier tunes that center the band’s self-reflection. Bowman tells us “Language and Perspective was four teenagers trying to figure out how to make an album as a way to avoid college and getting real jobs. With this album, it was our job, and we were not going to half-ass it.”

The band drew inspiration from not only their life experiences, but their friends and family’s as well. “I write observations about life and I try to pinpoint certain elusive emotions with music. For me, it’s the easiest way to express the way I’m feeling.”

The album starts off strong with title track, “Disappear Here.” Bowman’s voice is as immediately recognizable as it was on Language and Perspective. He croons, “I really thought you’d be home by now / guess I was wrong again / I used to think I could go somewhere / Turns out I’m ill prepared,” setting the tone for the rest of the album as the desire to move forward and the anxiety about what is left in its wake.

The next track is lead single, “Heartbreaker.” It’s a personal favorite with the repeated whispering of “heartbreaker” sounding oh-so-80s. The melody is filled with gentle percussion and carries a carefree summer vibe, serving as a jovial goodbye to an ex-lover who you know is nothing but trouble. “Off She Goes” is quintessential Californian and cinematic. One of the more unapologetically gleeful tracks off the album, it manages to feel like a John Hughes movie, without ones sounding precious or twee.

Christo told us exclusively “Many of the songs on this album came from a broken down place. Writing the lyrics to ‘Patience’ was an entirely cathartic process. I was going through a hard time and wasn’t dealing with it properly.” He continues, “I remember one night, waking up at 4am and having this overwhelming urge to let something out. So, I just started writing everything down. I edited those ramblings and [a track] was born.”

“At the end of that, I just remembered feeling restored,
like I’d been in the ocean.”

“Swimming in the Moonlight” is another great standout of the album. With its sentimental lyrics and light-hearted tune, “Swimming in the Moonlight” is the only love song that is not plagued with worry or difficulty communicating, though about being blissfully in love. However, summer love can’t last forever, as the track is followed by one of the most anguished on Disappear Here.

“Defeated” showcases Bowman’s vocal abilities and is where Bad Suns truly shines. Delivering lyrics that detail the recognition of one’s mistakes and a real fear of the future, while a rhythmic drum pulses hypnotically underneath is emotive and makes for an overall great song. Christo said the track “was the most difficult to work through.” He continues to say the track has been a work in progress since he was 15 years old. “We tried to pull it together for our first album, but it wasn’t working. It was a huge relief to finally get that song to where we wanted for this album.”

The final track, “Outskirts of Paradise” concludes the album on a powerful note. The song proudly shows off the essence that is Bad Suns; filled with contagious guitar melodies, upbeat percussion and a charming bassline.

Disappear Here feels like a natural progression from it’s predecessor, Language and Perspective. Understandably, Bad Suns don’t want to become an entirely different band. In fact, sonically, the two records still feel very linked. Though Disappear Here experiments with different sounds, but the band ultimately stay true to their organic sound. Disappear Here proves that they will, however, continue to write consistently strong alt-pop music. Music that is thought-provoking and sensitive, but will also be the soundtrack to your next jam session.

Read the rest of our interview with singer Christo Bowman below.

Where did your band’s name come from?
CB: The back cover of an album by The Bravery.

For people who haven’t heard a song, how would you describe your sound? And which track would you recommend they listen to first?
CB: I wouldn’t. I’m proud of “Daft Pretty Boys” on the new record. I think our sound is well represented in that song and at the same time I feel like there’s one foot through a new door.

How’d the name for the album come about?
CB: I was re-reading ‘Less Than Zero’ by Bret Easton Ellis, a story about the distorted lives of young adults in Los Angeles, and after the “Disappear Here” billboard appeared in the narrative a few times, it hit me like a ton of bricks. It was the perfect prompt for a listener. I also like that Ellis took the title of his book from an Elvis Costello song. He’s one of the artist who got me into songwriting, so it almost feels full circle in a way.

How would you describe the themes in this album?
CB: It’s a rollercoaster ride between pessimism and optimism. I wanted these real moments of darkness to be represented and discussed, because we all go through it, but it’s really about hope and saying that you don’t have to succumb to that darkness. There is a light.

Do you remember the first song you ever wrote?
CB: Yeah it was called “I Don’t Want To” – I remember writing it in my cousin’s bedroom in Seattle, eleven years ago, and thinking “This is what I want to do from now on.”

What are some of your favorite songs off the album? Whether it’s the live or studio recorded versions?
CB: I’m really happy with “Love Like Revenge” – that song started off as an electronic laptop-demo I recorded on a plane ride home from London. Once that rhythm, bass line, and horn section were in place, I knew it could be exciting new territory for us. I remember giving Ray my headphones, looking for his opinion, and I still remember his face of approval as he listened to it in the seat next to me on the plane. That’s the best. We’re always aiming to impress one another.

In the past two years, you’ve gone on tour with some amazing bands like The 1975 and The Neighbourhood. What has been your favorite tour moment so far?
CB: Our tour with The Neighbourhood and Hunny was a career highlight for all of us. All three of those bands went to school and basically grew up together in one way or another. It felt nice to have this traveling road show of guys you might see loitering in a 711 parking lot in the valley on any given night, but we’re all playing to thousands of people who care, every night.

What’s a song you wish you’d written?
CB: The first one that comes to mind today is U2’s “I Still Haven’t Found What I’m Looking For.” Dream collaboration? I would love for us to cut a record live-to-tape with Ryan Adams.

In an ideal world, who would you love to cover one of your songs?
CB: I would love to hear a re-interpretation of one of our songs coming from the female perspective. You said “in an ideal world,” so maybe Paramore’s Hayley Williams.

What are three records you can’t live without?
CB: Violator by Depeche Mode, Head On The Door by The Cure, and U2’s Unforgettable Fire.