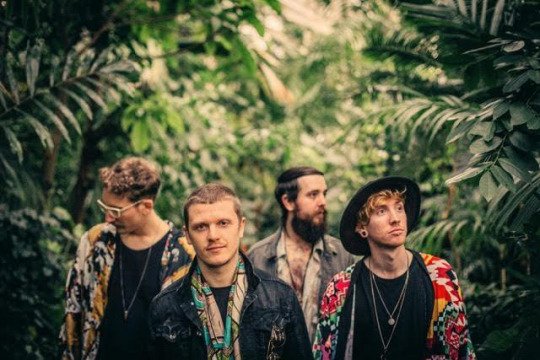 Natives have unveiled the music video for their latest single, “Stop The Rain.” The British tribal band easily stand out from the rest due to their unique concept; all four members each play various forms of percussion. Having the aim in mind to make a positive change in a time filled with negativity through their optimistic tunes resulted in “Stop The Rain.”

The tune is the second of 20 off their upcoming sophomore album, which will be accompanied by a novel that further elaborates the experiences the band has been through and the stories that helped form the album. The infectious tune sends a positive message through its euphoric beats and uplifting melodies. The use of multiple percussive instruments combined with a tribal sound makes for a perfectly balanced catchy pop tune.

“Stop The Rain” is a song about mixing with other cultures. Shot primarily in Morocco and showcasing the band’s adventure around the country, the video serves as a great accompaniment to the inspiring song, sending a message to raise awareness against racism around the world.

“Our love for percussion led us to Morocco, a muslim country where the Arabic East meets Sub-Saharan Africa. We instantly fell in love with the rhythm of the place. From the main squares to the mountains, everything had a beat. We met Berbers in Agadir, where drumming circles are a part of everyday social life and were captivated by the way rhythm was used to bring people together and tell stories. This idea, coupled with the welcoming warmth of the culture formed the heart and soul of ‘Stop The Rain,’” said the band in their YouTube post.

Natives will be putting on a one-off show next week, followed by supporting MOTHXR on tour in September. Check out their full dates below.