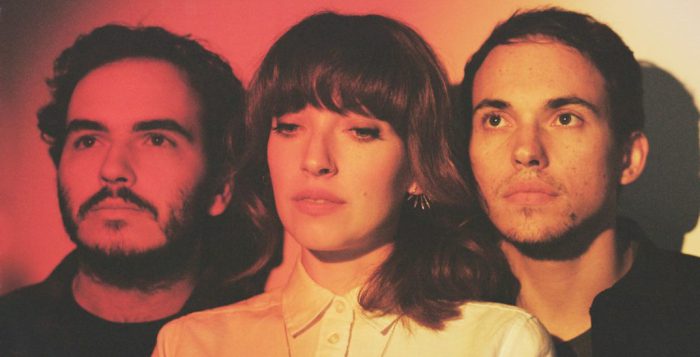 Overall, it’s a good year to be a fan of Daughter. The London-based trio of Elena Tonra, Igor Haefeli and Remi Aguilella released their second album, Not To Disappear, back in January but they continue to lift singles off it and create music videos. The latest content from Daughter is a captivating new video for latest single “No Care.”

It establishes the mood very quickly, with a series of rapid shots in black & white and red, before introducing one of the video’s main characters in the form of dancer Marta Polak. There are many different things at play just in this short time, a very fitting type of chaos to the song. The beginning of “No Care” is just as eccentric, with a slightly off beat sound but quickly finding its footing.

The emotion of the song and accompanying video have a very interesting relationship. It cuts to the band in a room, lead singer Elena Tonra looking rather apathetic while declaring “I don’t care anymore” but in between her emotionless guise are intense images flashing around that seem to have the opposite effect. The dancing is far from apathetic – it is expressive and dynamic, carefully juxtaposed against the toned down imagery we see of Tonra. The sentiment also lies in the lyrics. While the song is almost monotone, she sings of very real human emotions and problems. It’s the same type of duality that comes to life in the video.

Aesthetically, the “No Care” video is very Twin Peaks meets The Shining meets indie rock. This comes from the black, white, and red color scheme and the ominous hallways and empty rooms. Paired with strobe-like flashes, this creates an overall feeling of intensity and urgency. In its own way, it really does fit the song quite well.

Daughter will continue to tour extensively across Europe this fall.