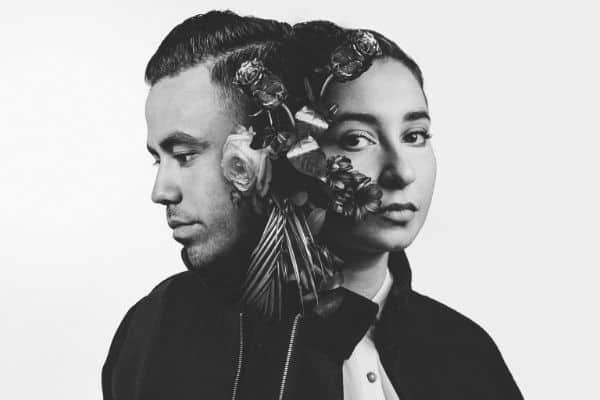 Ta-Ku and Wafia have finally come together to collaborate on EP all their own, (m)edian. Ta-Ku is known for the remixes he conjured for the likes of Flume, Chet Faker, and Aluna George as well as his slick, chill-wave production which features eminent hip-hop influences. Wafia’s covers of  Kanye West’s “American Boy” and Mario’s “Let Me Love You” are what originally attracted attention to her, but listeners stayed for the soothing, wispy timbre of her voice.

(m)edian begins with “Treading Water”. The track bubbles to a start and gradually works into a sultry, slow heartbeat of a groove. The vocals, like the other tracks included in the EP, feature a back-and-forth format. The duet set-up works particularly well for this track given the subject matter behind the lyrics. “Treading Water” details two people struggling to find peace between one’s inability to shed their armor, the other’s tendency to cling a little to tightly, and the capacity they both lack to change their ways. Ta-Ku sings, “It’s like you never let me past skin deep,” as Wafia rebuttals, “Don’t trip up on the mess I always leave.”

The third track, “Meet In The Middle”, tells quite a different story from the opening song. Instead of an emotional tug-of-war between two people, “Meet In The Middle” tells what happens when everyone around you is saying someone isn’t right for you, but something continually motivates you to work towards a middle ground to prove everyone otherwise. “There’s something ’bout you that just keeps me compromising. Don’t speak your language, I’ll be fluent in the morning, talk just a little, let’s meet in the middle babe.” Bass-y drums and an exchange between chordal acoustic piano and fleeting synthesizers characterize this particular track.

The EP closes off with “Love Somebody.” The song begins with quiet, ominous synths that lead into Wafia’s nymph-like vocals and a beat that is satisfying, yet uncharacteristically fast for a Ta-Ku song. As sparkly, shivering strings are strummed in the background, Ta-Ku and Wafia sing at once, “I know we never get it right, we only ever seem to fight. Anyone else would walk away, when you love somebody then you stay.”