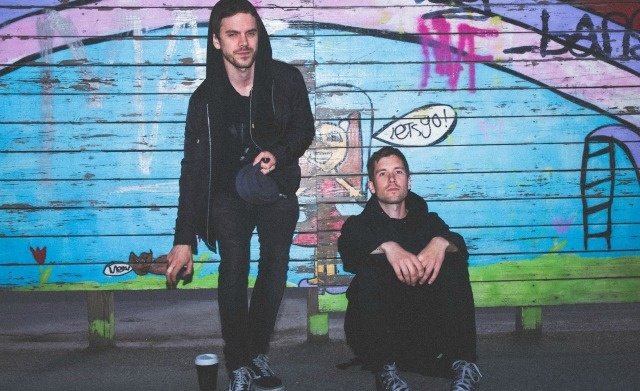 MEOW, the debut EP from Berlin-based Dog Orchestra is a study of emotional distance, despair and distraction, set against a distinctively urban backdrop. The songs register as a response to the contradictions of city life; the buzz of youthful excitement mixed with weary isolation; the high and the hangover.

Daniel DePierre and Niklas Malmborg are both from Stockholm, but now live in Berlin, which has served as the incubator for this project (Feb 1, the penultimate track, is a love song to that setting). They originally began writing songs as a prelude to nights out on the town, “a pre-party ritual.” But soon, those rituals began to extend until 4am, and the music itself became the focus.

On MEOW, they collaborated with producer Darrel Thorp whose other accolades include Beck and Gnarls Barkley. The result is a dynamic set of songs which are all distinct but share a brooding sonic and thematic thread.

The band describes their process of creating sound as “a way of infusing your surroundings with purpose or meaning so you can navigate them emotionally.” In a generation of nihilists, sometimes we have to scratch out our own scriptures. The songs are mainly in the first person, but there is a sense of anonymity that seems essential to incorporating other voices. The second track, “Club (Fragil)” features the wistful lead vocals of singer Lune, providing a welcome counterpart to DePierre and Malmborg’s five o’clock shadow voices that narrate the rest of the tracks.

This ambiguous perspective is a conscious choice. “It’s all autobiographical…in the sense that each song is inspired by what we’re going through at that particular moment,” they admit. But there is also a healthy amount of creative license. “It’s more fun and in some ways more honest to write from the darkest chambers of your hearts to the brightest rooftops of your dreams without being constrained by the immediate reality at hand.”

The characters in these songs are clearly troubled by the discrepancies of wealth and status that are painfully present in their lives. “And it’s the guest list kids, against everyone else, you know they’d all say that they knew you, if you fell,”  ponders “Hotel,” a numbing track of scattered percussion and interior voices. The tension between the haves and have nots is a recurring theme, and source of discomfort.

Throughout the EP, New York City functions as an archetypal monolith, a symbol of success. The highest one can aspire to is a “Lower East Side hair cut” and to be able to say “Midtown is a wishing well.” This seems surprising, given that the band is rather euro-centric, but again, the choice was a conscious one: “New York represents the epicenter of the collective dreamscape of the western world which we’ve subscribed to since we first started talking about the concept of ‘success,'” they explain.

Dog Orchestra just may have a niche to fill as self-conscious electronic prophets. MEOW is just testing the waters; the duo are sitting on an album’s worth of material which may make its way out into the world early next year. In the meantime, follow them on Soundcloud. See what you think.