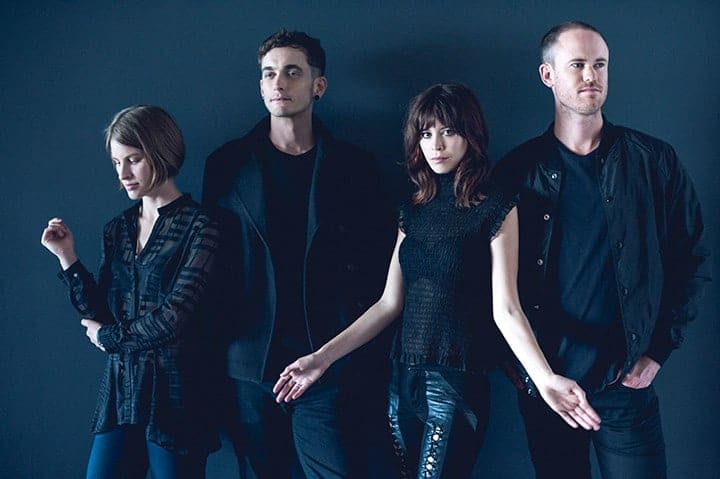 Brand new video from Australian quartet The Jezabels dropped earlier in the week for their track “Smile.” This video follows the happy news that keyboardist Heather Shannon has been declared cancer free after her six-month treatment.  This fortunate announcement means The Jezabels have rescheduled their Australian and American tour to support their recently released album Synthia.

The video depicts lead singer, Hayley Mary, leaving a one night stands’ flat and walking through familiar London landmarks wearing her outfit from the night before.  Her heavy leopard print jacket looks out of place in the early morning sun accentuating her pale skin, angular features and dark makeup making her look almost predatory.

During her walk she comes across a couple who appear very much in love, reveling in one another’s closeness and as she passes she stares with a look that can only be described as longing, singing “we can have a little thrill, share with me your stories ’bout your life, what you’re dreaming of.”  Her words suggest establishing a fleeting connection that will only last one night in complete contrast to the couple on the bridge who practically ooze love and affection.  The devil may care swagger in her step reflects the attitude sweating through her lyrics, talking about how little moments shared at the bar and tidbits of information murmured over drinks barely even scratch the surface of a person’s soul.  She goes on to institute one rule and that is: “don’t tell me to smile.”  This becomes the mantra for the rest of the track.

The tune itself is a misty rock-infused narrative disputing the feelings and emotions that come the morning after.  Hayley’s deep tone during the verses provide some diversity as her voice climbs to a soft falsetto in the chorus before catapulting into a heavy music break.  The song is a collective fusion of peaks and valleys combined to birth the offspring of a rock ballad and an upbeat indie pop tune.

The end of video finds Hayley letting loose in the back a taxi and dancing through the streets repeating her mantra and adding “for all you know I just buried my mother.” This truly cements the fact that one night isn’t enough to understand anything about a person.