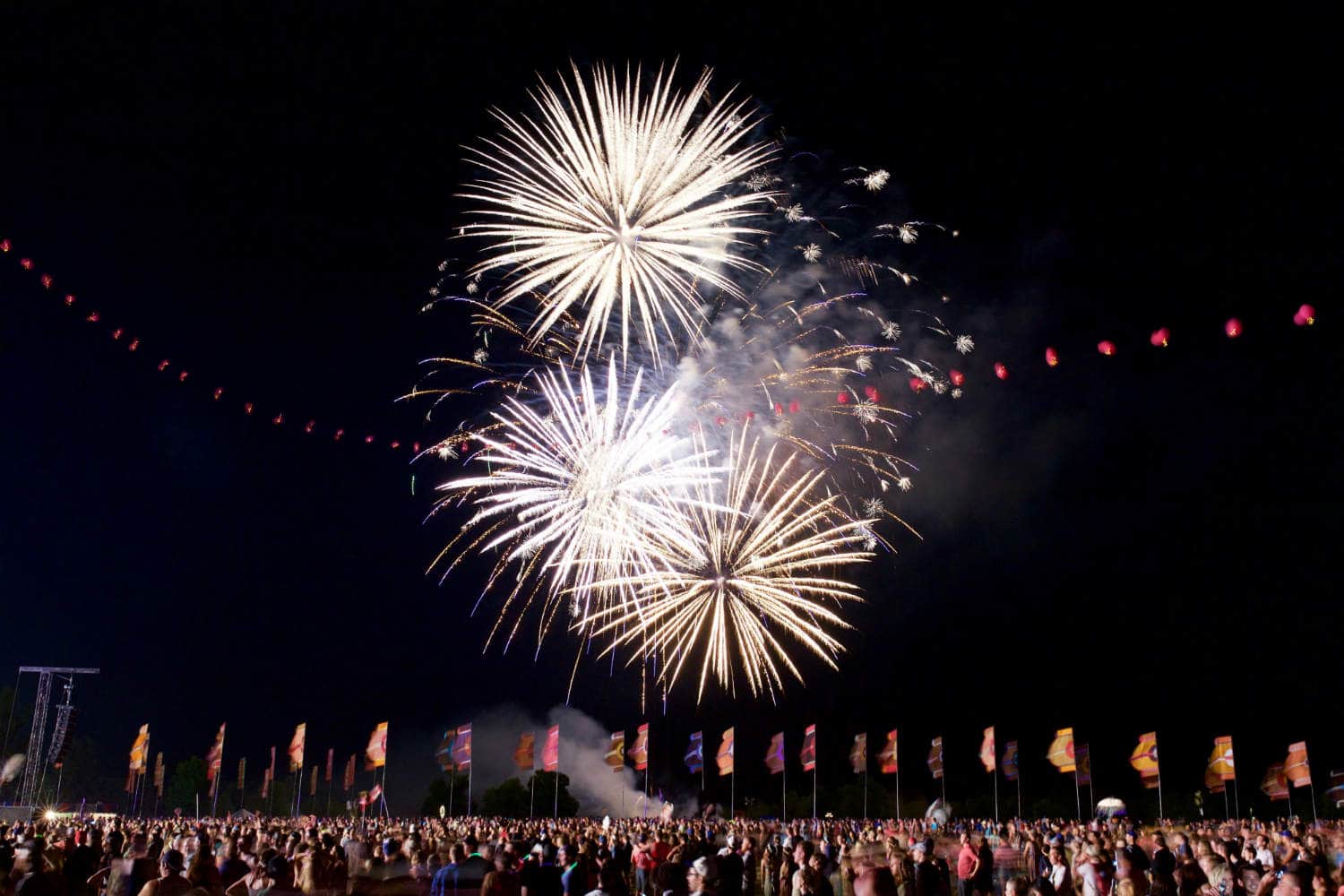 Festivals, to me, have always been these exotic different dimensions riddled with over consumption of drugs, alcohol, heat stroke, flower crowns and cultural appropriation so I’ve stayed away until this year.  WayHome Music Festival takes place in Oro-Medonte, Canada and its relatively new.  In its debut year it brought in headliners like: Neil Young, Kendrick Lamar, Sam Smith and Alt-J as well as a plethora of positive reviews.  This time it came back with: The Killers, LCD Soundsystem, Arcade Fire and CHVRCHES to equal and maybe even surpass the success of the previous year.

For those who don’t know Canada we experience our weather in extremes.  If there’s ever an in between it is a teaser period of pleasant sweater weather for a month.  This past weekend there was a heat warning in effect and on Friday temperatures were feeling like a sweltering 46 degrees.  However, the heat didn’t seem to dampen anyone’s spirits as we trudged through the humidity to watch our favorite bands.

Now, I could go on to tell you all about how incredible CHVRCHES were, how Arcade Fire had the crowd hanging on every word, or how The Killers played an unforgettable show permeated with nostalgia but I won’t because that’s what was expected of them.  Don’t get me wrong, they were all amazing, but I knew they would be going into it.  The neat part of festivals is that the extensive lineups encourage you to go and experience new things and listen to new music.  That being said, I’m going to share my favorite unexpected encounters.

Canada’s beloved Arkells put on what was probably my favorite show of the entire 3 day festival.  Following the release of their song “Drake’s Dad” off their upcoming album, Morning Report, frontman Max Kerman took the stage by storm lighting up the crowd with his contagious energy and infectious smile. The entire band looked like they were having the time of their lives and it definitely translated onto the crowd as we jumped around screaming lyrics to our favorite songs.  Paying homage to one of the greatest Canadian bands of all time, the Arkells played a cover of “Music At Work” by The Tragically Hip who recently embarked on their farewell tour.  Closing the show with “Leather Jacket” had the crowd buzzing, begging for more and complaining about how an hour set was not nearly long enough for our hometown heroes.

Young Empires are a band from Toronto that were a very small blip on my musical radar having listened to their album once and when the opportunity to check them out presented itself I was pleasantly surprised.  Matthew Vlahovich’s stage presence and lead vocals were excellent and my concerns about the electronic elements of their indie pop sound were immediately squashed when they played tunes like: “The Gates” and “Uncover Your Eyes.”  The crowd responded so positively to their incredible performance giving them the recognition they unquestionably deserve.

Sunday had to be one of my favorite days of the whole festival.  I had only previously listened to “All We Do” by the band Oh Wonder and went to listen to their afternoon set on the main stage.  My friends and I brought a blanket and sat on the hill to listen to the London based alt-pop duo serenade us with their melting harmonies speckled with R&B vibes and their soothing stage presence.  It was the perfect vibe for a Sunday afternoon in preparation for Haim and The Killers later on in the evening.

I’ve had a lot of people ask me about my weekend and I can’t get through the conversation without raving about Haim for at least 5 minutes.  This badass girl-band took my breath away with their killer guitar solo’s, broken down composite drum beats played in tandem and smooth harmonies. Haim was a forced to be reckoned with oozing strength, power and prowess as they rocked the stage with the confidence of kings.  Their fast paced lyrics, low breathy tones and catchy melodies had me hooked from start to finish.  The sisters quickly climbed the ranks of my top 5 performances playing tunes like “Falling,” “My Song 5” and course closing the show with crowd favorite “The Wire.”  I couldn’t have asked for anyone better to prepare me for a night with The Killers.

WayHome was definitely an eye opening experience.  There are things I would do differently next time and there I things I wouldn’t have changed for the world.  The dynamic of youth combined with music cultivates such an interesting enterprise.  Everyone is present for the same thing and it’s almost too easy to connect with strangers, in fact it’s actually difficult not to make new friends as well as new memories.  The dates for WayHome 2017 have already been released so if anyone feels like a festival road trip I highly recommend making this one.
Start typing to see results or hit ESC to close
new music music interviews Interviews interview music video
See all results