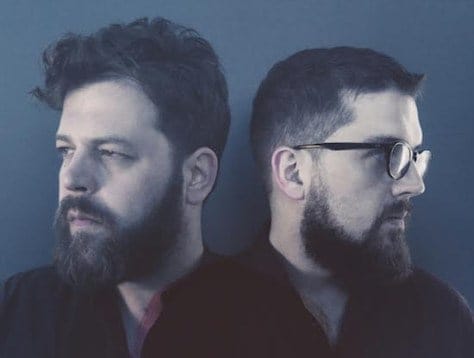 Ivor Novello-nominated folksters Bear’s Den return with stirring new single “Auld Wives.” The track is the first to be lifted from their forthcoming Red Earth & Pouring Rain album, the follow up to their 2014 debut Islands that we named in our top 10 of that year.

The new track, which presents a dynamic progression from their folk roots, is a deeply personal one to singer Andrew Davie who explains its meaning: “Where my grandparents live in Scotland, and where my mum grew up, there’s this cottage I used to go to write. It’s always been a bit of an escape for me but also reminds me a lot of growing up, which has always been a trigger for me with songwriting. Nearby there’s three rocks called the Auld Wives Lifts. No one knows how they got there, and there are faces carved into the rocks. There’s all sorts of folk tales around them that have stayed with me growing up. The song is about my grandad who lived near there. He developed Alzheimer’s in his old age. Knowing someone, and them not knowing you any more, is a difficult thing to go through. Auld Wives became this way of talking about it, of venting about that feeling, and make more sense to me.”

“Auld Wives” is also the first material from the band since the departure of guitarist Joey Haynes back in February who left on amicable terms – ‘a conscious untripling’ – to focus on his personal life. Bear’s Den now exists as a touring six-piece centered on a nucleus of the two original members, singer-guitarist Andrew Davie and multi-instrumentalist Kev Jones. The new dynamic has seen a musical shift with the new record set to be cloaked in the lush alchemy of 70s and 80s FM rock, citing Fleetwood Mac, The Eagles and Bruce Springsteen as strong influences.

Alongside the new record, the now-duo are poised to take another giant step in their careers with an extensive European tour which includes their biggest headline show to date at Brixton Academy as well as numerous festival appearances including Glastonbury, Rock Werchter and T in the Park.

The album, which is due for release on July 22nd, can be found on their website here alongside all of their live date listings.