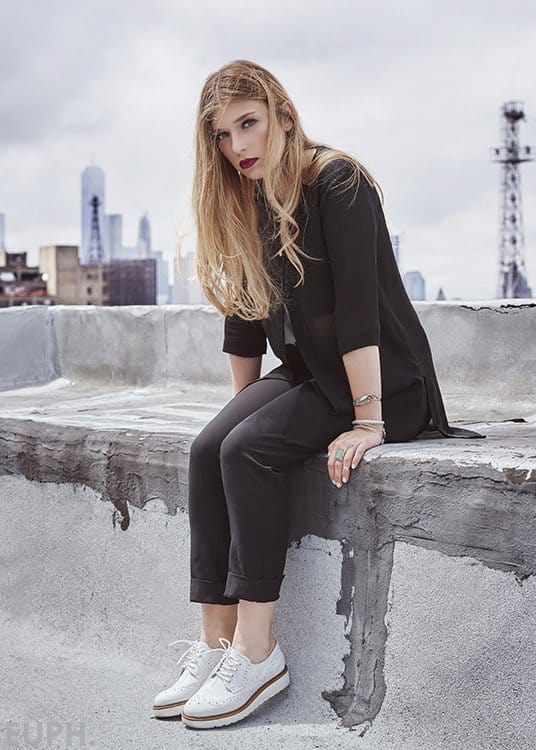 Amidst white drapes, Moroccan themed tapestries, and obscure purple-pink lighting stands VÉRITÉ – entrancing the audience with her crisp siren-like vocals that sail over the dark noir-pop melody of one of her latest single called “Constant Crush.” The new, darker-toned number is marked by her silky voice entertaining the expectations she’s built up around a potential lover.

Taking a departure from a brighter indie-pop sound, Byrne filled Gansevoort Meatpacking’s Zerzura at Plunge with her sultry vocals, pulsing bass lines, and truth-telling lyrics from her Living EP – released May 6. The new record is a look into another side of the charming chanteuse who hails from Orange County, New York.

“There’s a decision I made to intentionally step out of the quote-unquote electro-pop, genre just because I don’t necessarily think that sort of production style defines me as an artist,” admitted Byrne. “Lyrically, I think all the songs are equally as dark, but this time I think the production and overall EP just reflected that more,” she added.

Switching back and forth between a standard and synth-rigged mic, VÉRITÉ continued to draw fans in whilst performing a new track called “Living” – a soul-baring number that blends piano, synths, and treble claps a-la The Weekend while showcasing her dynamic vocal range before returning to popular numbers like the uptempo “Colors” and care-free “Weekend.”

Before her performance Kelsey Byrne sat down with us to talk about her new sound and creating the Living EP.

You used to be apart of a punk girl band, how did you come to define your sound now?
I think it’s definitely been just a gradual process and its something I realized takes a lot of time and I kind of embraced that. And so there’ve been a lot of false starts and things that really didn’t work out. But I think it’s just been time to find out, and maturity, and growth, and stuff like that.

You’ve said that Sentiment EP was a really natural process, was the process the same with “Living?”
Totally! I mean it was more of a structured process with Living because the timeline was more defined. The process was equal. And when I felt like we came to deciding EP versus album and putting all the songs together, it was very much “These are the songs, let’s go.”

Are there specific songs that are being saved for an album?
Totally! I have lots and lots.

Do you forsee an album anytime soon?
I’m not sure. I mean, I think right now I’m in a position where I have a lot of choice. I think I’m going to focus on writing and see where that takes me in the next few months. I’m not sure how the next release will be packaged, but an album is possible.

With Living you worked with some amazing producers, how did you come to work with them and what was that dynamic like for you?
Totally random. When I initially went to LA for writing sessions last summer, it was very much to experiment and meet new people and work with new people. So I think that working with those producers collaboratively to finish those songs and finish the production, and then kind of edit down their perspective to make it one cohesive project wound up being an after thought of necessity. So, definitely a random process that serendipitously ended up working out.

Living is a bit darker in tone, was that due in part to maturity, producers, or something else?
There’s a decision I made to intentionally step out of the quote -unquote electro-pop, genre just because I don’t necessarily think that sort of production style defines me as an artist. Lyrically, I think all the songs are equally as dark, but this time I think the production and overall EP just reflected that more.

How have you matured from your first EP to the most recent one?
I definitely think that I’ve grown in confidence and I think it’s a reflection of that. Some of the statements I make I think are more literal and less shrouded in metaphor and mystery. It was a lot of starting to show who I actually am, what I am actually saying. Much more upfront.

How was the tour you just wrapped?
The turnout was surprising in a good way. Its amazing to sell out cities and to have hundreds of people to show up where you’ve never been before.

What else is next for you?
I’ve been on the next thing for weeks, so now that the tour is finally over I can take action and start, start writing, and piecing together the puzzle that will be the next release. It’s been just thoughts up until now. There’s a ridiculous amount of unreleased material that may or may not make it on [the next release] and then [there’s] just this desire to push myself out into new and uncomfortable territory.