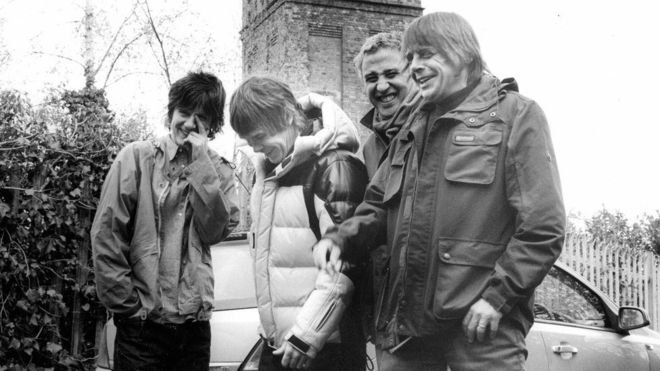 The Stone Roses – All For One

Manchester music royalty The Stone Roses return with “All For One,” their first new material in 21 years.

Ian Brown, John Squire, Mani and Reni’s second coming (or should that be third given the title of their 1994 sophomore LP) continues to live up to the hype. Having originally disbanded in 1994, the members pursued other projects – Brown released a string of solo albums, Squire formed The Seahorses before also going solo and Mani had a stint with Primal Scream. The group reformed in 2011 for an extensive reunion tour both in the UK and internationally, and were more recently announced as this year’s T in the Park headliners.

They spent this past week hinting at an announcement after Manchester city center was once again decked out with images of their signature lemon, a tactic they had previously used to precede their reunion tour announcement, before Mani told a fan to “keep listening to the radio this week.” Having influenced another of Manchester’s finest, Oasis, The Stone Roses have seemingly turned the tables as “All For One” appears to borrow the Gallagher’s Britpop stylings. Brown’s trademark lax vocals salvage the rather underwhelming lyrics but the stand out performance on the track is undoubtedly Squire’s heroics with a truly epic guitar line that will go down as an instant modern classic.

As well as headlining T in the Park, the quartet have also booked dates at Manchester’s Etihad Stadium (17th, 18th & 19th June), New York’s Madison Square Garden (June 30th) and Marlay Park in Dublin (July 9th). It is not yet known if and when a third album will be released although frontman Brown told NME the band were working on “glorious” new music so until then, why not just bask in the lemon-y glow of “All For One.”