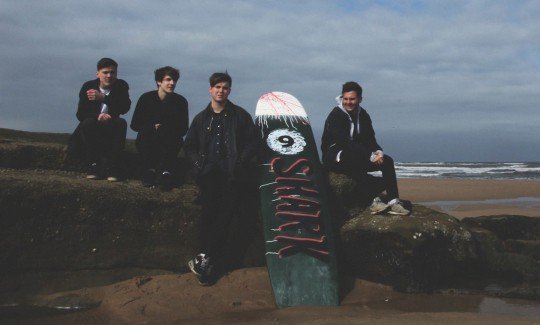 Following on from a mammoth 22-night headline tour, quintessential indie-rock quartet Lisbon have announced details of latest single “Shark.” The track, which is released on May 27th via Think Tank? Records, showcases a heavier side to the Newcastle band not seen in their much more groovy, earlier material such as “Vice” which was released earlier this year and earned support from the likes of Radio 1’s Annie Mac.

The change in tone can be attributed to the subject matter as frontman Matthew Varty explains: “Shark depicts the struggle young bands have nowadays to make a name for themselves in the music industry. The daily financial issues of being in an emerging band versus never wanting to give up on your dream, whilst at the same time avoiding the many ‘sharks’ that you cross paths with along the way. The song is a way of expressing our frustrations, whilst portraying a newfound darkness. We want to follow the percussive vibe from our previous singles but a lot of our new songs have a more raw live sound.”

2015 was a momentous year for the band with support slots for Little Comets and Eliza and the Bear. They are set to head back out on the road next month for their third headline tour with plans to make a real mark on the national scene this year. The raucous nature of “Shark” with its thunderous percussion and crunching guitars makes for a potent statement of intent.