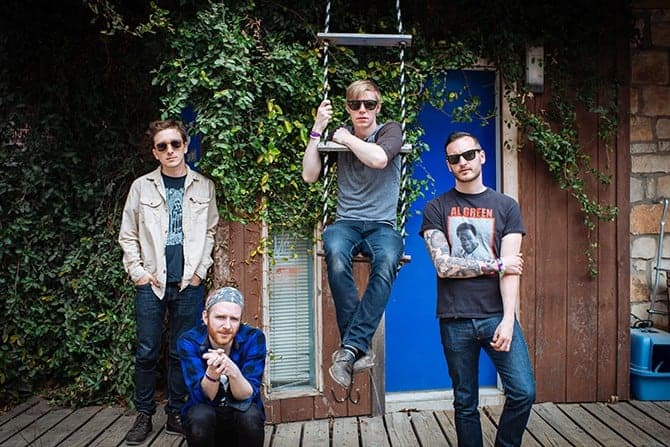 Bear Hands – You’ll Pay for This

Brooklyn’s own Bear Hands recently released their junior album titled You’ll Pay For This. Dylan Rau, Val Loper, Ted Feldman, and TJ Orscher experiment with a lot of different sounds in this work, but manage to incorporate them in a cohesive, creative manner. When these embellishments and shifts in style occur, it’s a pleasant surprise. The lyrics that soar over smooth, alt-rock riffs deal with the issues any and all millennials have faced from modern dating to finding meaning in life.

The album kicks off with the exciting track “I Won’t Pay,” one that perfectly exhibits the diverse sounds that characterize the album. The song’s introduction sounds like what you would hear standing in line outside of a deep house club. Eventually, the track progresses into the first verse, channeling a sort of electronica sound. The rest of the song features long, strummed guitar power chords underneath female vocals humming “I won’t pay” repeatedly, receding back into the muffled bass track heard in the intro.

“2AM,” one of the album’s singles, blends a hint of Supertramp-esque honky-tonk synths into a chill, alternative rock song as the lyrics delineate the woes of someone who wants to forget just how old they are. When your favorite bars have closed and neither your booty call nor your dealer is answering your texts, Bear Hands reminds us that this is for the best because “nothing good happens past 2AM.” Its lighthearted, yet sobering nature makes it one of my favorite tracks on the album and while its catchiness makes it an excellent single.

Another noteworthy track found in the list of twelve is “Like Me Like That.” Dylan Rau sings about being passed out in an unfamiliar city and waking up without any shoes on or any memory of where they could be, yet he thinks his companion likes him like that. No matter how much of a disaster or emotional wreck he is, his partner still gets a sort of strange enjoyment out of watching him essentially run in place. The song has a good groove to it and a memorable chorus, much like a The 1975 hit, making it stand out in the track list.

The album closes with the track titled “Purpose Filled Life,” an homage to all of those who do not want to be a burden on their loved ones as they travel down the seemingly endless pathway to a meaningful, fulfilling life. The vocals and delicate, plucky melodies make it sound like a GroupLove track. However, this works particularly well delivering the same air of lightheartedness found in “2AM” to a topic some may find somber.

Overall, the album has a lot of great tunes that can easily become huge hits. You’ll Pay for This has personality and is definitely worth the listen.