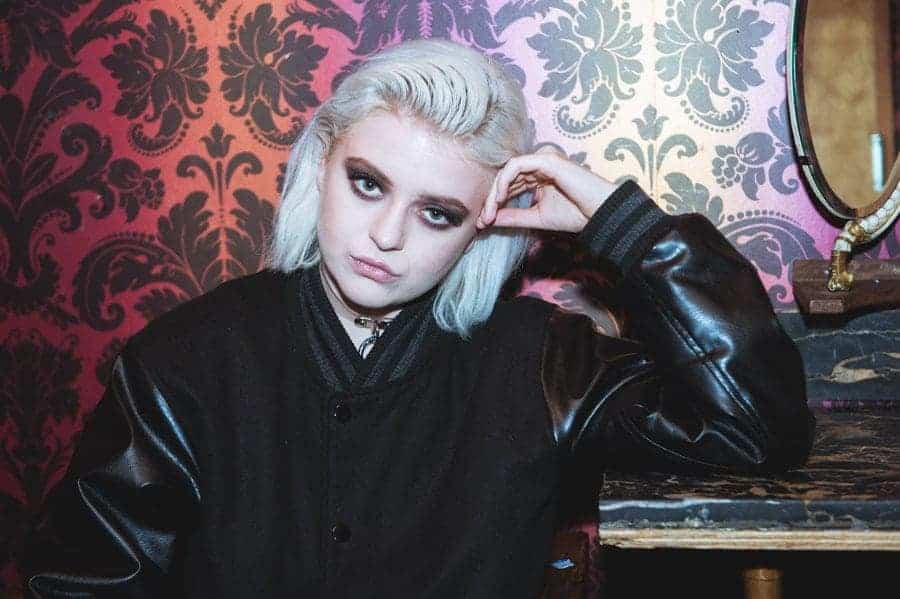 Eyeing the camera from across Stage 2 at Rockwood Music Hall, bleach blonde, 19-year old Scottish pop singer KLOE gives us a tongue out/ middle finger up pose – not as a “fuck you,” but as a “fuck yeah!” A couple hours prior to taking the stage she shared with EUPH. during a portrait session that she was so hyped to finally have the opportunity to shout, “What’s up New York?”

After a quick line check with her supporting bandmates, that opportunity was fulfilled and not wasted. KLOE was among several artists billed to perform a quick but nothing short of stunning set during Communion Music’s monthly residency at the multi-stage venue Tuesday night. For music fans packing the room, eager to discover new music, they were not let down when introduced to her electronic pop driven beats fused with melodic vocals, hints of R&B, and edgy AF vibe.

Her set included all tracks from her EP Teenage Craze (as well as a yet to be released song) all arranged perfectly to grab you attention, keep you interested, and party along. She opened with her latest single, “Touch,” followed by a darker track “Grip.” Slight tech issues occurred between songs, something she noted had happened during their set at SXSW just a month prior. After joking for a few more seconds about not having any jokes to tell, the issue was fixed and she introduced us to a new track “You Don’t See Me” which features a very catchy chorus and fun danceable beats that prompted more energy form the crowd. After confessing she doesn’t’ want to leave New York (which we agree she shouldn’t) she swooned us with “Feel” and closed out with “Teenage Craze,” whipping her head and getting down to each beat drop.

Signed to Columbia and IAMSOUND and soon to be releasing more new music, you can listen to KLOE’s Teenage Craze EP HERE.

We started a monthly Spotify playlist! Check out our April playlist here.