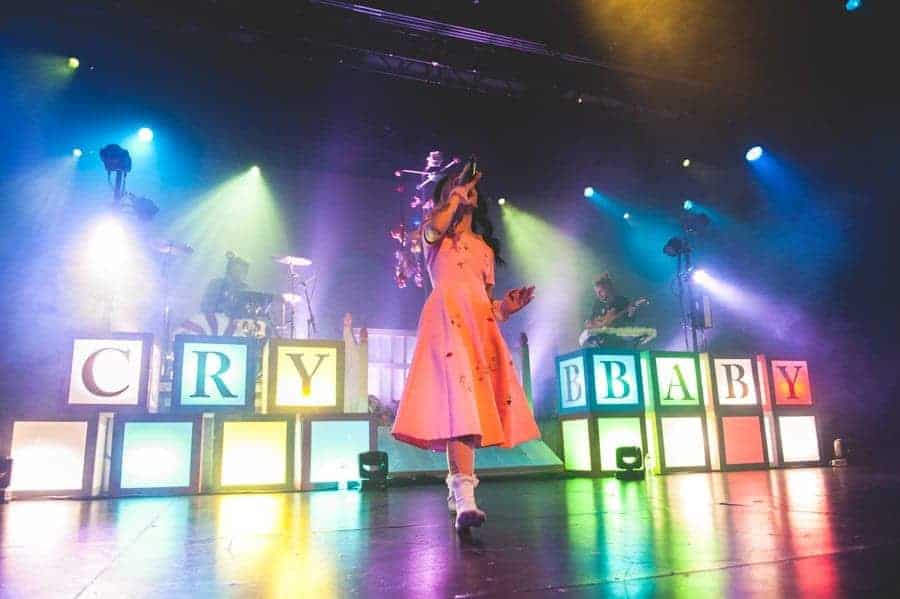 The event staff could hardly calm the fervent crowd of young teens pushing towards the front of the stage as the curtains drew back to expose the oversized crib centered between large blocks C-R-Y and B-A-B-Y on the stage at PlayStation Theater Thursday night. Two costumed Teddy bears take their place above the blocks, the first at the drums/ drum pad, and the other at the keys and guitar. All eyes were fixated at the crib as a silhouette emerges from inside, wearing a beret and a pink doll-like dress, Melanie Martinez hops up and toys with the crib mobile above her. The child like aesthetic is an inventive disguise for the dark pop world she soon invited the crowd into, with songs that are also cloaked by titles you would find in a child’s word search book. Martinez brought down the crib doors and began the show with her debut album title track and tour name, “Cry Baby.”

Before creating this persona for herself, Martinez had already captured the attention of the nation during the third season of NBC’s The Voice in 2012. She ditched the covers and began writing original material, releasing her debut EP, Dollhouse, in 2014 making her an online phenomenon with views exceeding 19 million at the time of release (now at over 35 million). A year later she would release her debut album Cry Baby and announce the accompanying tour, including the sold out show at PlayStation Theater.

Not one song went unsung by the crowd themselves during the rest of Martinez’s set which included the haunting “Carousel” which gained most of its success after appearing on an American Horror Story promo. A standout moment was moments before one of the slower songs, “Training Wheels,” when Martinez dedicated the song to a fan had to be lifted from the front of the crowd to prevent her from passing out. She got the crowd moving again with tracks like “Pity Party,” “Tag, You’re It,” and “Cake.” The set ended with the bass-pounding encore “Mad Hatter,” which like title suggests – evoked everyone to go crazy, be crazy, and be okay with it!