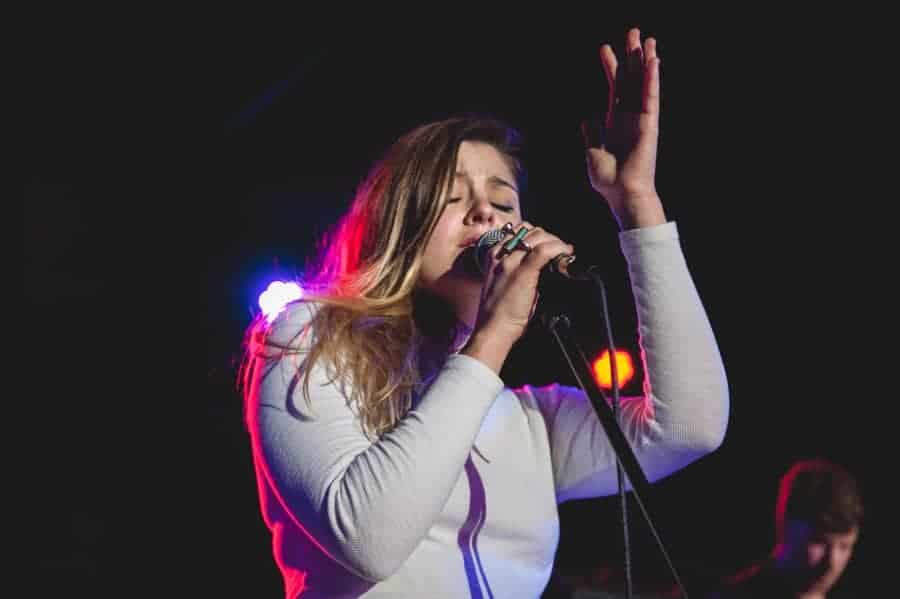 Not sure there is a better way to celebrate a pre-International Women’s Day than going to the Lower East Side’s Mercury Lounge to see the latest of talents to hail from Sweden for her first ever (not to mention sold out) New York City performance. Playing her first of two nights in New York, singer/songwriter LÉON provided the room full of eager and curious fans a short but very sweet taste of something bigger to come. Being a part of an audience that gets to see an artist make their debut in your city is quite an exciting thing. It’s the moment an artist gets to bring their music to an unfamiliar territory, which in our city can be a nerve racking and intimating thing to do. It’s also a unique experience for fans and followers to catch their new and enigmatic muse play in an intimate setting.

Having built up some (unintentional?) anticipation by having a backing band on stage for a good two minutes or so, LÉON was soon greeted with warm smiles and applause from the crowd as she approached to the mic dressed in all white. She took a brief moment to thank everyone then jumped right into her EP’s title track, “Treasure,” giving familiarity before moving onto a new track “Think of You.” She appeared more at ease and began to utilize the space on the small stage to move about more during the upbeat “Nobody Cares.” As of now, know of “LÉON’s Lullaby” to be one of the lesser upbeat tracks on the EP, but after the sweet rhythmic track she shared “Enough” with us which was carried by a steady beat and her remarkable vocal abilities that demonstrated how much emotion she can project in her live performance. Having to take a couple seconds staring down at the stage, I think this is one of those raw moments that allowed us to really see and feel what she has felt. This was about as personal as it got as her set was rapidly coming to a close. She did an indie pop take on Artic Monkeys’ “Why Do You Only Call Me When You’re High,” the catchy “Tired of Talking” track currently toping popular indie Spotify playlists, and then closed with a song she has yet to perform live till now, “For You.”

At the end, I felt like I wanted more from LÉON. More stories, more emotion, or maybe just more time – something! Perhaps it might have been nerves that caused her to slightly rush through or maybe the intentions to remain enigmatic and let her music speak for her. Whichever the case, myself and the fortunate fans that caught the singer/songwriter’s New York debut are hooked on her melodies and rhythms deemed ‘Future Retro’ and you should be too. Check out her EP, Treasure, here.

Full Set List:
“Treasure”
“Think Of You”
“Nobody Cares”
“LÉON’s Lullaby”
“Enough”
“Why Do You Only Call Me When You’re High” (Artic Monkeys cover)
“Tired of Talking”
“For You”