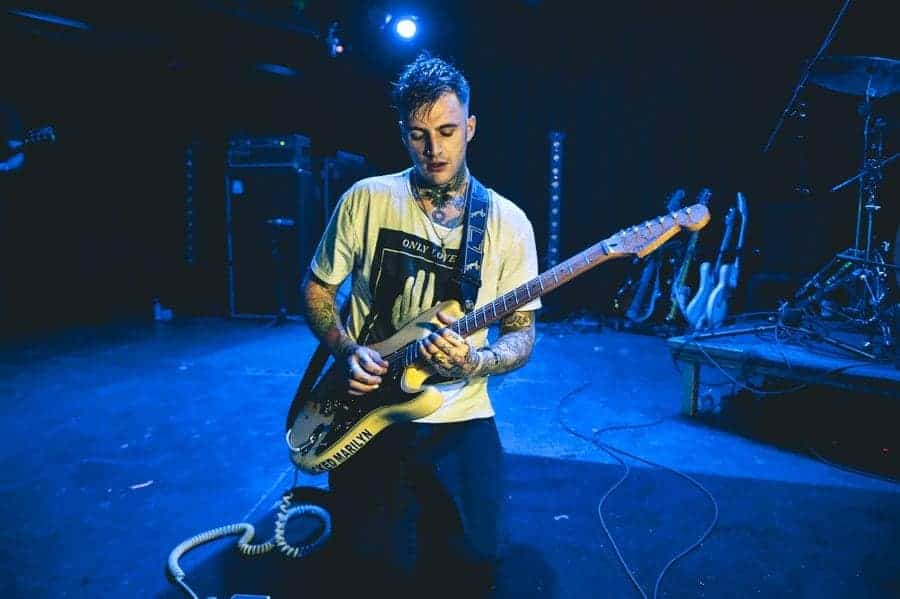 Hot off their European tour, the two-time GRAMMY nominated rock band Highly Suspect made an exhilarating return to NYC playing a sold out show at (Le) Poisson Rouge Saturday night. Originally from Cape Cod, the band’s trio call Brooklyn home, and despite their latest single “Serotonia” featuring some west coast vibes and a line about moving to California, front man Johnny Stevens assures the packed room that they are not going anywhere.

You know you’ll be in for a dope show when not only does the band have a tour manager that doubles for their hype man, but then for them to come out onto the stage to 700 adrenalized fans, drinks in hand, and playing Pharoahe Monch’s “Simon Says” in the house. Richard Meyer grabs his neon strung bass guitar and heads to the front of stage right, while twin brother, Ryan, sporting shades and a suite settles himself at drums to the left. From the center, paralleled by two light panels, comes Johnny cloaked in his black M.C.I.D. (my crew is dope) hoodie, taking a couple warm-up jumps, a swig of his drink.

The crowd moderately bob their heads and sway their bodies to the opening of “Bath Salts” then fully head bang when they move into “Lost.” The room is taken on an electric journey through Johnny’s guitar riffs overlaid by soulful groans and Ryan’s kickass drum solos, as they go through several songs from their album, Mister Asylum, including as “Vanity,” “Fuck Me Up,” and the very personal and hopeful track, “Mom.” The set came to a mellow point where bassist, Richard, got to showcase his vocals on the bluesy “Winston,” while Johnny and Ryan watched off stage, smoking a joint. They came back on to play their last couple of songs for the evening, but first humbly thanked the crowed for being a part of their M.C.I.D, then invited manager Bill McGathy and 300 Entertainment Executive, Kevin Liles, up for a shot. In probably one of the most wildest moments of a rock performance I’ve seen in years, they guys brought up many fans to rock out with them on stage during a “Claudeland”/ “ATL” mash up then destroying their set – literally, Ryan kicked his drums down before they all exited off stage.

Playing a rock sound truly their own with hint of blues and metal, it won’t be long until Highly Suspect outgrow these smaller venues so you better catch them and their pulsing performance in an intimate space while you can. For more tour dates head to HighlySuspect.net and check out their music on Spotify here.