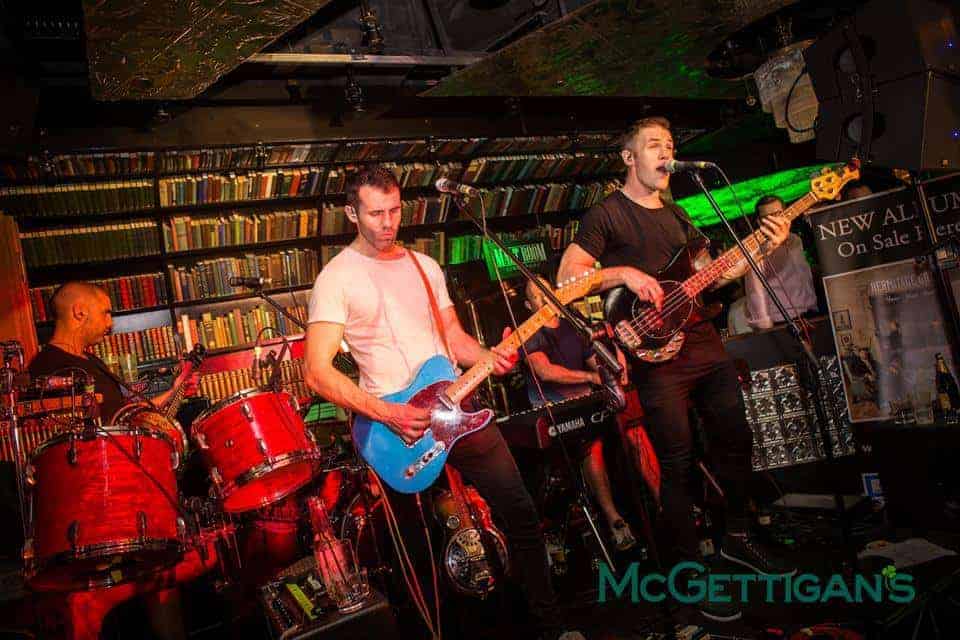 There could not be more apt a way to celebrate St. Patrick’s Day than with a stellar show by a phenomenal Irish folk band. As part of their St. Paddy’s celebrations, Hermitage Green played their first ever Singaporean show in Irish bar McGettigan’s. Hailing from Limerick, Ireland, folk-rock band Hermitage Green signed with Sony Music Ireland in 2015. With the production talents of Phillip Magee, who has previously worked with other familiar Irish acts including Kodaline, The Script and The Academic, their debut studio album, Save Your Soul, was released on March 4th earlier this year.

Kicking off the show was “Cloud 9,” which sure left the crowd feeling no lower than. As they began plucking the strings of the banjo, you could see the crowd who had been mid-conversation pause and turn their heads towards the stage. As the song progressed, you could see a growing crowd gathering near the stage and begin dancing. Following that was “Renegade,” yet another upbeat tune that left the crowd dancing along,

Next up was “My Only Wish,” this song best showed off the powerful vocals of lead singers and brothers Barry and Dan Murphy. Their vocal range in this tune seemed never ending as they continued reaching for the increasingly higher notes in the chorus.Their cover of The Fugees’ “Ready Or Not” and Marvin Gaye’s “Sexual Healing” awed the crowd to no end. As Dan began his harmonica solo, the band chimed in with the bongos and keyboard melodies and left the crowd cheering at the top of their lungs.

Next came possibly the most tender moment I have ever witnessed. Barry announced that the next song “Make It Better” was written for their sister who was in the crowd. As they serenaded their sister with the sweetest lyrics, “I asked God for you, at first sight I adore. You changed everything, angel on a family chain,” you could see the crowd tearing up, trying their hardest not to swoon.

Barely giving the crowd time to recover from their sniffles, they jumped in with “Give It All,” an upbeat anthem that brought us all back to a rocking mood. Next up was a ballad, “Magnificent,” which contained their most cohesive and melodic harmonies and left the crowd swaying along. Following that were their more mellow tracks, “Gibson” and “Aisling,” which showed off more of their folky banjo sounds and African-inspired beats.

“Wait For Me” was a special addition to the setlist, at the request of their previously mentioned sister, leaving the crowd breaking out into dance once again. “Not Your Lover” is a song written with fellow Irish rockers Walking On Cars’ Patrick Sheehy and one of my favourites. Next came one of their first singles and more prominent tunes, “Quicksand.” By this point, the crowd was filled up with alcohol and the partying only intensified and you could even spot some people doing the Irish jig.

Following this was a cowboy-inspired “Golden Rule,” which sounds like a tune off a cruising beer commercial and the title track off their album, “Save Your Soul,” before cutting to an interlude of percussion solo by drummer Dermot Sheedy and percussionist Darragh Graham. Ending off the spectacular set was traditional Irish song “Parting Glass,” a cover of The Beatles’ “Eleanor Rigby,” and another of their first singles, “Jenny.” At the end of it all, the crowd was all partied out. The smiles on everyone’s faces is only evidence that Hermitage Green definitely rocked the house, making everyone feel like they’re back in Ireland this St. Patrick’s Day weekend.

All in all, the show put up by Hermitage Green absolutely encapsulated the meaning of St. Patrick’s Day. Filled with fun dancing, people dressed up in green and lots of beer, this gathering to celebrate the Irish culture was definitely a great way to commemorate this special day. Despite being not Irish and very, very Asian, being at Hermitage Green surrounded by all the celebrating Irish people truly showed me the spirit of St. Patrick’s Day and is an experience I would remember for a long while.