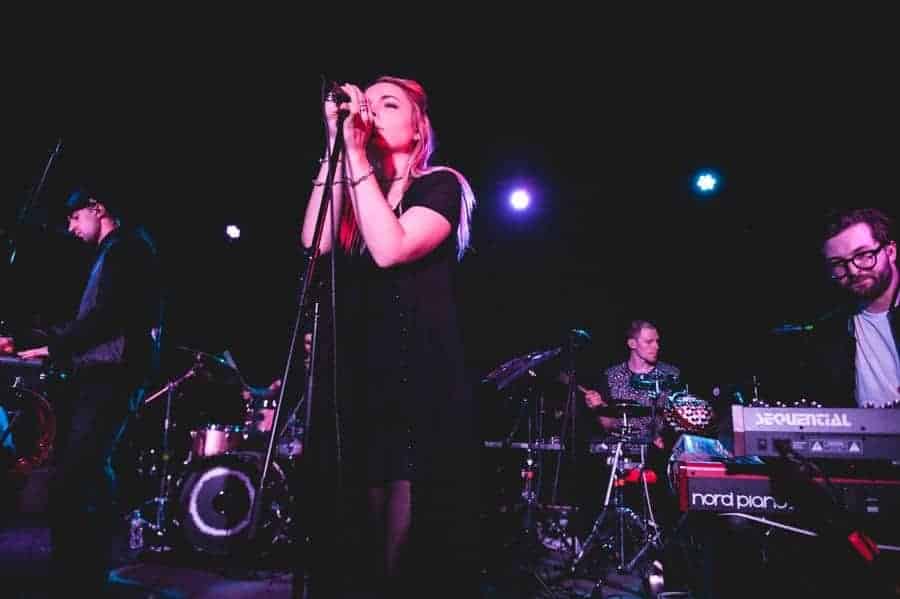 HÆLOS made their New York debut at Mercury Lounge Tuesday night, as the first stop on their tour through the country in support of their recently released LP, Full Circle. Best described as atmospheric trip-hop for an after-hours club setting, the UK trio created an ethereal experience for the moderately filled room.

With Lotti Benardout and Arthur Delaney on mic, Dom Goldsmith on keys, and three additional members brought on the road to provide percussions, guitar, and drums, they began the show much like way their LP Full Circle opens – with an audio excerpt of “The Spectrum of Love” by Alan Watts – which sets the tone of both the album and the celestial set. The music backing the excerpt track blends seamlessly into the dark and cinematic “Pray,” making for a strong opening and display of what’s to come. The rest of their 8 song set included tracks from their album such as “Earth Not Above,” “Cloud Nine,” album standout “Dust,” and their take on Beloved’s “The Sun Rising.” All of which put the audience in a euphoric trance through the melodic rhythms provided by Goldsmith, and the angelic vocals of Benardout contrasted with the deeper more haunting vocals of Delaney. An experience that fans greatly appreciated as some went to the side of the stage to shake members of the bands hands as they walked off stage following the closing song, “Oracle.”

Full Circle was released last week through Matador Records and you can listen to it here.