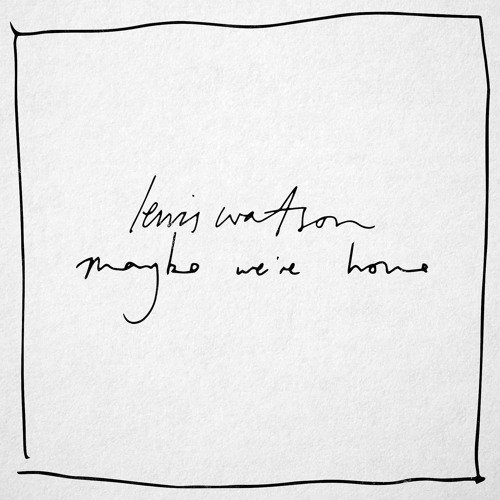 “What if we were never meant to glow, maybe we’ll never know. We’ll stay forever if we don’t go, but maybe we’re home.”

English singer Lewis Watson is most known for his hauntingly beautiful acoustic folk melodies. His debut album The Morning included collaborations with some familiar names, including Gabrielle Aplin and Hudson Taylor. With his newest release “Maybe We’re Home,” he has seemingly abandoned the stripped back sound we all loved for an upbeat, pop-rock approach. But I have to say; I am really loving the change.

The track starts off with a rather toned down verse, as it gradually builds up as the song progresses. As soon as the drumbeats enter, the whole song takes on a different outlook, maturing in the process. The low undertones in his vocals awes, sending shivers down your spine. Layered with harmonies, the pumped up tune felt really motivating and hyped me up for a war I wasn’t about to fight. Despite the drastic change in sound, the song still retains an element that is uniquely Lewis. He brought something new to the table and it has evidently worked.

Filmed in a warehouse, the video simply shows him and the band rocking out to the track in the space. He previously stated that he intended a video that did not pull focus away from the music, and this succeeded in doing just that. The camera pans around the band and occasionally into each member. Through that, you can see the commitment each of them has in making music, which is truly heartwarming.

I absolutely loved “Maybe We’re Home” and it has left me extremely excited for his upcoming album and whether this change in sound is here to stay. Currently, Lewis Watson is supporting Gabrielle Aplin on tour. You can catch them here.