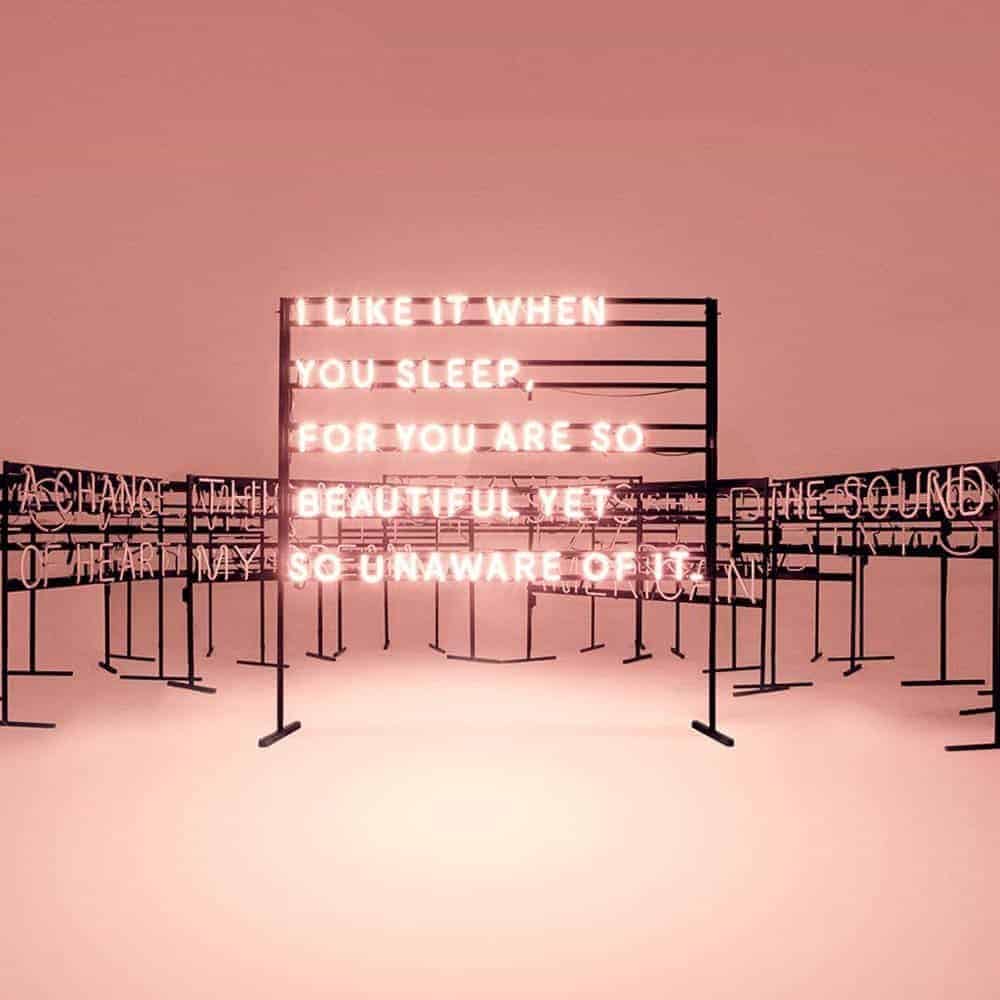 The 1975 – I Like It When You Sleep, For You Are So Beautiful Yet So Unaware Of It

In one day The 1975, comprised of vocalist Matty Healy, lead guitar Adam Hann, bassist Ross Macdonald and drummer George Daniel, are set to debut their sophomore album, the luxuriantly titled I Like It When You Sleep For You Are So Beautiful Yet So Unaware Of It. A sprawling seventeen tracks I Like It When You Sleep… is genre defying, sounding at times like Bowie, 90s R&B, and even some good ol’ fashioned gospel. Fans have been eagerly awaiting The 1975’s sophomore album since 2013, but the band has been almost unthinkably busy in the past few years, garnering a die hard following, touring relentlessly, and of course recording and perfecting their upcoming release. However, after listening to I Like It When You Sleep… I can’t imagine anyone, fan or not, begrudging the band for the wait.

Beginning with the track “The 1975,” a reworking of the opening song off of their self-titled album, The 1975 embark on a self referential theme that flows throughout the entire album. “The 1975” shares lyrics and musical overtures with the original, but instead features a backing chorus of vocals. It’s bigger and more grandiose than the original, perhaps mirroring the band’s current status. They aren’t boys recording in Healy’s bedroom anymore. Instead, they’ve become established artists on the precipice of releasing a career-defining album with a tight knit group of fans willing to follow them anywhere.

From there the album flows into two of it’s more pop-y tracks, the already released “Love Me” and “UGH!” before changing tempo with “A Change Of Heart.” Matty Healy is a master of masking complicated emotional dilemmas within songs that, on first listen, sound deceptively upbeat. The track has a bit of an 80s-Peter Gabriel vibe, Healy’s vocals sliding delicately over a quietly reverberating synth and backing drum beat.

“If I Believe You” follows next and is one of the strongest and most surprising songs on the album. Healy is joined by a gospel choir as he sings about searching for divinity and ultimately coming up empty handed. The juxtaposition between the subject matter, gospel vocals, and smooth R&B production is delicous, creating a song that gives more and more on each listen.

“Please Be Naked” and “Lostmyhead” are similar to the band’s more ambient work on their debut album. The first is an entirely instrumental track showcasing Daniel’s skills with production, while “Lostmyhead” takes cues from the song “Facedown” off of their first album. Each movement of  “Lostmyhead” feels deliberate and tenderly created, almost like a love letter to their past era and their fans. The album is full of these little easter eggs, as Healy calls them, little pointed clues that their fan base will understand and relish. It’s the band’s way of understanding and respecting their past, while promising fans that new and wonderful things are to come. A perfect segue into some of the album’s stranger and more actively dissonant tracks.

“The Ballad of Me and My Brain” is a short song clocking in at a little under three minutes. The song details the idea of losing one’s brain in an almost literal way, that can be taken at once as tongue in cheek and gut wrenchingly honest. Healy’s vocals are intentionally strained and filtered giving the song the feeling of almost being underwater. It’s strange and over the top and in some ways perfectly, wonderfully The 1975.

“Loving Someone” sonically feels like the natural progression to “M.O.N.E.Y.” Healy sings quickly over an insistent drum beat and floating synthesizers, while the song pulses and surges. A mixture almost of spoken word and electronic production, Healy urges us to think critically about fame, in perhaps a more subtle way than he does in “Love Me.”

The title track of I Like It When You Sleep… is more overtly electronic and ambient than some of the others on the album. With definite The Postal Service vibes, one can also hear strains of earlier songs within the six minute track if you listen closely. The track feels like the quiet and ethereal glue that holds the differing components of the album together. This is what The 1975 does best, they are unafraid to take risks with their sound, experimenting with many genres even within one song.

“The Sound, “Paris,” and “This Must Be My Dream,” are catchy pop tunes, large and unabashed, they however implore the listener to listen and think. Healy’s sweeping lens is critical of himself and oppressive society around him. He wants pop with a message and that is exactly what he’s made.

The final two tracks are perhaps some of the most unanticipated of the entire album. “Nana” is an acoustic song discussing the death of Healy’s grandmother in 2014. The song is simple, and all emphasis is put on the lyrics and emotive vocals. The middle of the song dips into a soft synth, giving it the air of a slower Paul Simon track. Healy directly addresses his grandmother and dedicates the song to her,

“The crowds will sing, their voices ring, and it’s like you never left.”

However the most poignant moment of an at times emotionally charged album is Healy’s quiet, “I haven’t been doing too well” at the very end of the track. In it’s simplicity it encapsulates the man whose life has changed so drastically in the past few years. For all the analyzing and bravado, sometimes it comes down to a quiet admission, and in that moment the song becomes universally relatable and universally heartbreaking.

The closing song, “She Lays Down” details Healy’s mother’s postpartum depression. Healy, true to his character, is frank and unwilling to tiptoe around the messy bits of humanity. It’s a difficult song but one that presents itself as a kind of catharsis. Closing an album that reached far and wide in its musical range, with a lilting acoustic guitar and Healy’s wavering vocals, the song is almost the antithesis of the opening track, and yet that feels right.

The 1975 don’t want to just be one thing. They want to be everything. Healy lives on a largescale, he feels deeply, and his songs reflect that. How could a band that wants to talk about so much have just one sound? This is not the same four piece that swore allegiance to a monochromatic palette in 2013, but that band still lives within this one. I Like It When You Sleep… is a compilation of everything these last three years have thrown at The 1975, unexpected old lyrics or tweets pop up in songs, as they nod their head to whom they have been and who they will be. The 1975 is growing, expanding, and on a mission to give pop music a run for it’s money, and they definitely want to take you along for the ride.