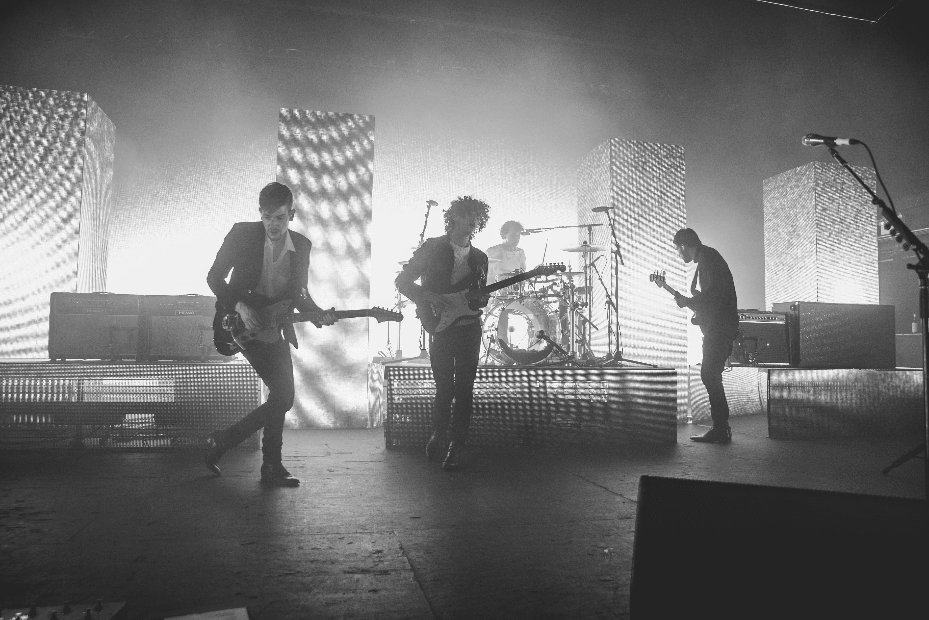 The steady release of singles from The 1975’s latest incredibly long titled record, I Like It When You Sleep, For You Are So Beautiful Yet So Unaware of It, has fans on edge awaiting more of this new ’75 sound. The band’s newest single “UGH!”, released on Zane Lowe’s World Record with Apple Music, has a strange yet intriguing name, which mirrors the themes of this new album and the current head space of lead singer Matt Healy and his mates. Instagram became the ultimate hype tool as the beautiful squares switched from moody grayscale scenes to hot pink-purple flowers and neon lights– a literal representation of the musical and thematic shift the band is to take. After 80s-esque indie pop-rock single “Love Me” released, fans were pleasantly surprised by the song’s upbeat sound, cheeky parody, and the strangely charming narcissistic cadence of Healy who belted the words “love me” in blue eye shadow and lipstick. “UGH!” embodies similar ideas with contrasting themes of self-disgust and self-obsession as a commentary on oneself and modern culture.

The band published the official lyrics of the song on their Twitter and Instagram in the form of typed letters on crumpled print paper,. The words narrate a battle between wanting to continue something and trying to “give it up” in the same breathe. One could say that the lyrics’ reference to numb gums, an irregular heartbeat, and asking for a card could possibly refer to Healy’s struggle with “giving up” drugs. Whether or not that was a part of his life before or after fame, the cheap make-up, temporary highs and overrated parties that come with the shallow nature of modern fame and acceptance in today’s culture seem to be a reiterating theme.

Through the lyrics, Healy reveals that in his effort to set himself apart, he finds he is still engulfed in this era of lost and self-absorbed youth looking for acceptance and/or a hefty check. In the second chorus, Healy sings, “When I said I liked it better without my money, I lied. It took a little while to recognize that I, I’m not giving it up again.” Even with his issues and struggles before fame and fortune, he still can’t admit that a life outside of this spotlight among shallow artists was better. Even after realizing everything wrong with it, like the drugs, he still can’t “give it up.” The order of releasing “Love Me” and then “UGH!” relays a message the band is trying to send. We received a straightforward interpretation when the band released a statement on their parody music video for “Love Me.”

“…Too many artists care what others think. We are for the ‘community’! A non-linear observation on everything that has been and what will become…”

A clear and profound agenda is mapped out for the band in their future endeavours, and in accordance, buoyant “UGH!” leads the way in its off-kilter electro-indie rhythm, innovative sound, and almost desperate, tantrum lyrics. As more songs are released leading up to the grand break of the album on February 26, fans can listen to the music and know this brave and brilliant new sound is coming from the soul of The 1975 with a purpose. Healy told Zane Lowe how he felt about their new sound and its future for the band in the interview for “UGH!”’s release. “If this album is what propels us, at least I can be comfortable with it, because I know I’m doing it for the right reason.”