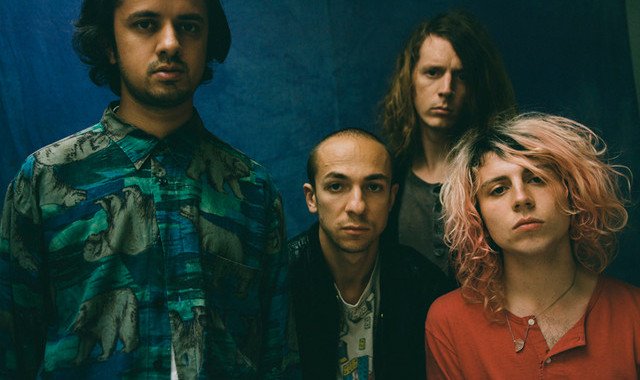 London indie rockers Mystery Jets return with new single “Telomere” along with news of a fifth album. New track “Telomere,” their first since 2012, is the first cut to be lifted from upcoming LP Curve Of The Earth, scheduled to drop on January 15.

On the track, frontman Blaine Harrison explains he was inspired most by his literary procrastination and musings: “Last winter I was spending weeks out of the studio writing on a houseboat moored out on a remote stretch of the river Thames. There was no mobile reception or television so I turned to some books I had with me for stimulus, and also distraction. I came across a line in a Milan Kundera book about our ancestry – how all their plights and victories live on through us in our blood. Telomeres are the caps at the ends of our DNA strands and keep our chromosomes from fraying, much like the tips of our shoelaces. They are thought to hold the secret to aging and ultimately immortality. I loved the idea that there is this co-dependency between life and death that we will never fully understand. This is probably the first time Henry and I have used such an expressionistic approach to writing lyrics.”

Led primarily by piano, there’s an ever-present guitar line that dances sharply across the rich swell and melodrama encompassed in the four minutes. Producing the record together, guitarists Blaine Harrison, and Will Rees, drummer Kapil Trivedi and new bassist Jack Flanagan were fueled by the “gang mentality” they had when they first started playing together as a band. After playing the record in full at a gig at London’s Institute of Contemporary Arts last month, Harrison noted “We’ve been trying to write one of those records since we started out – something that can be played together as a whole and not be pulled apart.” If “Telomere” is anything to go by, expect Curve Of The Earth to be just as expansive and full bodied.

The band have already booked a number of gigs for February following their album release: