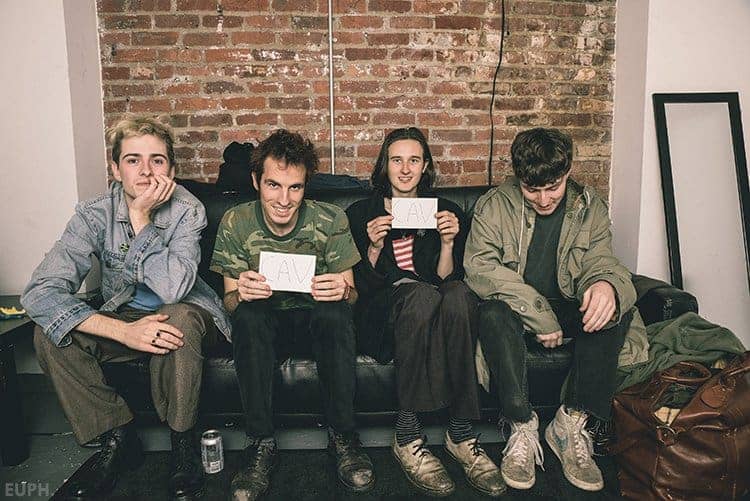 Your album marks a significant change from your first album. Can you pinpoint some influences for the psychedelic acid rock sound?
Ozzy: I guess the acid thing just came from — an offshoot of what we always do. But since the first album, we listened to and experimented with a lot of different music. We all went off on our own and made our own stuff. When we were in Chicago, where acid house was born, our manager took us to a record store and told us about it and that it would probably get along well with our music. We were inspired by just bigger landscapes and soundtracks that we liked. Beautiful music just sets a nice landscape.

Though the albums are very different, there’s still that connection to your debut. Were you nervous that fans would not receive it well because it’s so different from Where The Heaven Are We? Or were you excited because it was so different?
Ozzy: I think, overall, excited more than nervous because we’ve got these fans and they got us in a place that we can go into the studio and record again and not have to worry about money, but we didn’t want to give them something that was boring or something they’ve heard before.

We wanted to show them this is the band that we are.

I think the reason why our band got a bit of interest at the start was because we were trying to do something fun and great and for it to mean something. We just wanted to mirror that and carry on being more ambitious to get to these great places. I was definitely more excited to show people and we knew there’d be a shock at the start.

Exactly and the music grows with the artist and I think your fans should grow with you as well. You’ve said before that you felt like you had to shave your head and go to war in making this album. Can you tell us a bit about the process of making Mothers?
Ozzy: Going back to the other question as well, it felt like we really had to fight for this album to be, not accepted, but to understand what we were doing. It was kind of a brave move because we could’ve made an indie record that made sense and was trendy, and would get played on the radio. We took a risk because we knew it wouldn’t go mainstream, it wasn’t trending. It’s shocking and weird.

Do you feel there’s a difference in touring the US and UK so far?
Ozzy: Yeah, definitely. Although it’s hard to tell because they’re not really our own shows here. In Europe it’s different, I don’t know.
Cav: In America– it’s too early to tell– but everything seems bigger out here, but in a good way.

How’s it been touring with The 1975 tour so far?
Ozzy: We were scared when we were gonna get out here because it’s just us four and our tour manager so we have less of a crew than we usually do. We were scared their crew would be like, “ugh for fucks sake, these ragamuffins” and just annoying everyone and taking up their time and stuff. But yeah, they’ve been amazing to us already so it feels like a good one.

I’m sure you’re all endearing ragamuffins though. The music video for “Namaste” is really weird… but interesting. Were you involved in the concept for that?
Ozzy: Well, everyone said that song sounded like a game show—
Cav: So straight away we were like, “well, let’s do a music video.”

Do you think they add a deeper understanding to the songs?
Ozzy: Nah. I think “She Changes The Weather” was quite a deep video. With music videos, it’s either you just try so hard to do something that’s amazing or it just doesn’t work out and you put a girl and boy kissing. Those are the videos that are the best, where you don’t know what to do so you just do what you usually do.

Current favorite album or recently added?
Ozzy: The Toy Story soundtrack.
Zach: The Fall – Hex Enduction Hour.
Cav: I made loads of playlists for this tour like an American-themed one and a Christmas one.
Higgy: Ooh, Jerry Garcia at the moment. I saw his album cover and it’s amazing. It has a cat then I found out it was Jerry Garcia then I found out he was the lead singer of Grateful Dead. It’s called like Cats Under The Stars or something like that. It’s incredible.

The messiest on the tour bus:
All: Ozzy.

Takes longest to get ready:
Zach: Probably me.
Ozzy: Zach.