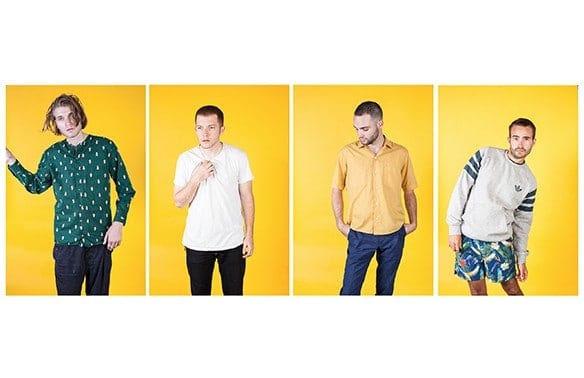 If you’re looking for a new band to follow, you’ve come to the right place. We talked to Alex Casnoff (formerly of Dawes and Papa) about his latest project, Harriet, their sound, and American Appetite. Stream the band’s current single “Bent” above.

So you’ve been around for quite a while, but for people who may not have heard of you— how would you describe Harriet?
Alex Casnoff: First I’d tell them we have guitars so they know we’re not a DJ. Then I’d tell them I’m obsessed with American songwriting; Paul Simon, Randy Newman etc. Lyrically I like things that have a perspective, are raw and real. Sonically though we’re interested in things that are a little more abstract. Our dream is to write Paul Simon songs but have Radiohead perform them.

How’d you come up with the name?
AC: I had 5 or 6 top picks. After one Google search after another they got knocked down by bands who had already claimed them. One day my mom said, “What about your grandmothers name, Harriet, she’d really like that.” I’m pretty sure I started laughing hysterically and said “NO, this isn’t about her liking it, this is my actual career.” But the next day I thought about it. I’m not a big fan of “Alex,” but I made it work, and my mom came up with that. I talked to Henry and we figured we could give the name its feeling and meaning with our music. So, it became Harriet.

How’d the lineup come together?
AC: Henry and I have been playing together forever. He was a good friend of my younger brothers. The band fell apart a couple times until we started making this record. We asked Pat, the bass player of our friend’s band, which we loved, to come up to Sacramento with us to record. You bond pretty quick when you’re trapped in a warehouse with no heating in the middle of winter for two weeks. We knew going in those two weeks we needed a new guitar player, so we asked Pat to ask Matt, the guitar player of his other band, if he would play with us. Over the next two years the record changed significantly as this band started to congeal.

How’d you get started in music?
AC: I started taking piano lessons when I was 5. It was therapy for me, and I think that’s important in terms of me becoming a songwriter. It’s the reason I associate it with a good way to get my feelings out. Those early on tantrums, of slamming my hands on as many keys as possible.

Who would you say are of your some major influences?
AC: Randy Newman, Paul Simon, The Beatles, Wilco and Radiohead. There’s so many more, but these groups were so important to me when I was in High School, which I think we’re really my formative years. I’m sure the entire 90’s included some stuff that now maybe I wish hadn’t seeped in. Steve Reich and his particular brand of minimalism had a huge impact on me. He was my life soundtrack for years. Jazz also, Mingus and Mehldau. I don’t know if I can always hear all of these things in Harriet, but they all affected me.

Tell us a bit about American Appetite.
AC: American Appetite is the amalgamation of 3 years. It’s almost like 3 albums in one. It’s not what we set out to make, which is the most exciting part to me. It was a little out of our hands, and very much like the writing process I just described.

What songs have you been into lately?
AC: “I Must Be In A Good Place Now” by Bobby Charles. It’s soooo sweet, but there’s also this sense that not long before the song starts things were not good for this guy. It gives me a very blue, velvety feeling. There’s something heartbreaking about it, even though the lyrics are about finding one’s place.

If you had to live on one food for a month, what would it be?
AC: Soylent, obviously.

Share your best piece of advice.
AC: Most people set their clocks fast so they’re early, but psychologically you feel like you’re late. This is a very stressful existence and I’ve never gotten anything from being early, besides a wait. I set the clock in my car 6 minutes slow, so if it’s 1:00 pm my clock reads 12:54. I’m always late, but extremely calm about it. What’s the point of arriving early if you’re stressed?

What human trait do you dislike the most?
AC: I hate sleeping. I mean I love it, but I wish I didn’t have to do it. I wish that I didn’t want to. There’s not enough time in the day.

Lastly, I just love asking everyone this question because I get such a variety of responses. If you had the celebrity power of Kanye West, what would be on your ultimate rider?
AC: I would have the In-N-Out Burger truck follow us on tour. I’m not talking about a few burgers in our dressing room. I want the truck. So I get it fresh and I can change my order if I need to.