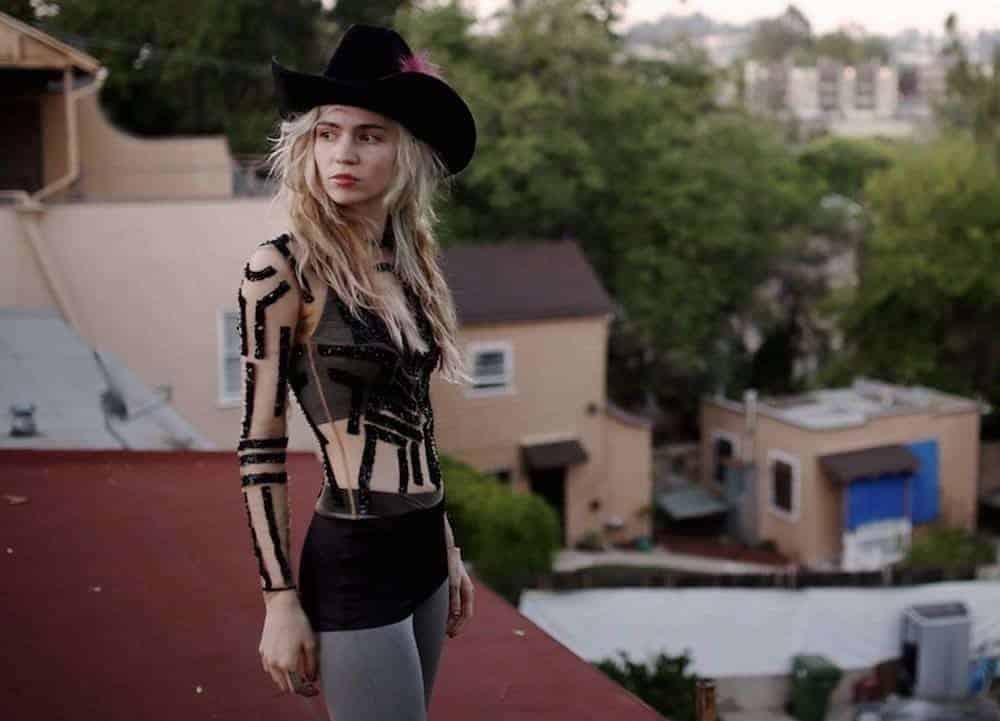 Grimes – Flesh Without Blood/Life in the Vivid Dream

After a three year hiatus, Claire Boucher (aka Grimes) is finally back on the music scene! She just announced that her upcoming album—Art Angels—will be released November 6, and we couldn’t be more ecstatic. With her new record on the way, the gracious Grimes has given her fans a sneak peek of it with her new video for “Flesh without Blood” and “Life in the Vivid Dream”—and let me tell you, it’s beautifully grim. Written, edited, and directed the song and video herself, Grimes shows that juggling many hats is possible for songwriters and artists.

Grimes breaks the video into two acts, with “Flesh without Blood” as Act I and “Life in the Vivid Dream” as Act II. Right as the video opens, there is an immediate connection between it and Japanese anime. I’m sensing she really wanted to incorporate different styles and elements to her video. As the camera pans to her first alter ego, Grimes hypnotizes us with a haunting stare. Her wolf-like eyes will make you stay. Grimes has lined up four different alter egos in the video: a bloodthirsty angel, a demure purple-haired Victorian lady, an underground punk gamer, and something that looks like a modern take on Michael Jackson eating spaghetti.

Upon the first listen, fans have understood and assumed that the song is a breakup anthem. Don’t be so haste to judge, though. The self-titled “urban faery” makes it clear that the song is not about a breakup, rather about a fallen friendship. In a recent interview with SiriusXM Music, Claire explains that each song is different and distinct, the reason being that she did not want to continually repeat herself on the record. “Flesh without Blood” falls under one of the most personal songs among the others. It’s about best friends who aren’t best friends anymore. If you listen closely, you can hear the anger and sadness emitting from the lyrics. She mentions that the song really shows how disappointed you can be in someone who you once truly admired. The track is an eye-opener, sending fans the message that all songs don’t have to be about romantic love, but platonic love too. I don’t know about you, but I really feel for the fallen best-friendships—and it’s truly heartbreaking.

The video makes a little more sense after knowing the meaning behind the song. With a murderous, voodoo-doll-stabbing angel lurking about and a roaming, blood-stained, Victorian Grimes, viewers can easily tell what is happening. Although she may look like an angel, her motives speak otherwise. “Flesh without Blood” is an obvious pop track, Grimes has not been shy about her love for mainstream pop music. She sets an example for haters and everyone that there is significant substance in pop music and fashion. Whether they like it or not, there are many pop songs and fashion icons that people can relate to. Grimes makes her point with this track. As the video breaks into Act II, “Life in the Vivid Dream” slows the chaos down and acts as a response or an aftermath, if you will, to Act I. It really shows a sadder picture to losing a friend, whereas “Flesh without Blood” portrayed an angrier side.

Grimes is a woman of many talents. She is a producer, singer, musician, songwriter, painter, video editor, and director. This video acts as proof. As Halloween approaches, you can definitely channel your inner Grimes and dress up as one of her alter egos. I’m sure she’d be proud. If you want to hear more of her soft, high-pitched, signature echoing, you can find her on iTunes, SoundCloud, and Spotify.