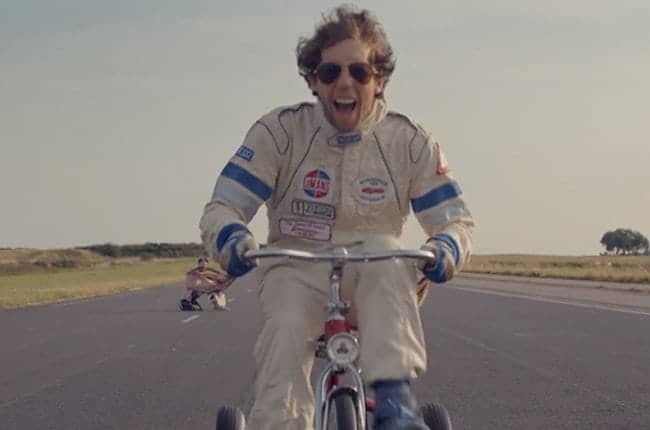 Broken Back – Happiest Man On Earth

“I belong to the roads now, coming home to my old town, this pretty smile on this pretty face, I think I am the happiest man on earth. Will you let me empty, the pain in your eyes, the chain in your heart, i’m gonna break it with my arms.”

Opening a song with a buoyant Spanish guitar riff, organic vocals and synchronized snapping is a recipe for popularity in indie-rock music these days. Bands like Milky Chance ruled the radio with their hit song “Stolen Dance,” which similarly has a more leisurely vibe to Broken Back’s “Happiest Man on Earth,” just not as full-bodied and with a lot more glee.

Jérôme, the Saint-Malo, France based soloist of Broken Back, displaced his vertebrae in 2012 which caused him to take a break from his music projects, welcome recovery and pick up his nylon string acoustic guitar. The setback caused the driven artist to slow down, but ended up nurturing his inspiration, causing him to start writing music for himself. Broken Back is a clever name to adopt in light of his misfortune, and ironically, it even seems to contradict the success he has now which started during his healing. His resilience brought us his EP Dear Misfortune Mother of Joy and the joyful single “Happiest Man on Earth,” a song and video that seem to celebrate Jérôme’s ability to come back with the sense that he could take on the world.

The video prompts viewers to laugh along the ride with the happy-go-lucky subject of the film as he passes by characters of life that one may encounter. His jumpsuit and aviator glasses are reminiscent of a rebelling NASCAR driver’s uniform and at this point, the viewer will be able to tell that the rest of the video will just get even sillier. It does. On the open road, the happiest man on earth tackles the long and winding pavement with a tricycle that requires a lot of effort and doesn’t seem to get him very far, however he meets many different people along the way.

In addition to passing a hitchhiker who is played by Jérôme himself, he comes across what looks like a ‘seasoned’ Texan baton twirler, a business man grappling floating money, an armed soldier and even a porn star. While the video is clearly meant to be funny, it becomes apparent to the viewer that through the happiest man on earth’s journey, some of these things are not right and don’t even sit well with him. This causes the audience to think a bit more, realizing that there is possibly a larger meaning to this song that spans larger than the subject’s isolated and most likely temporary happiness. In the end, the happy man, who has now seen more of the world, rides off in the distance escaping a riot that turns into a brawl. Although his happiness seems unshattered, the viewer doesn’t really know what to feel by the end, but somehow, the video still made you a little happier than you were before you pressed play.

To see Broken Back on Tour, find yourself at one of the shows below.