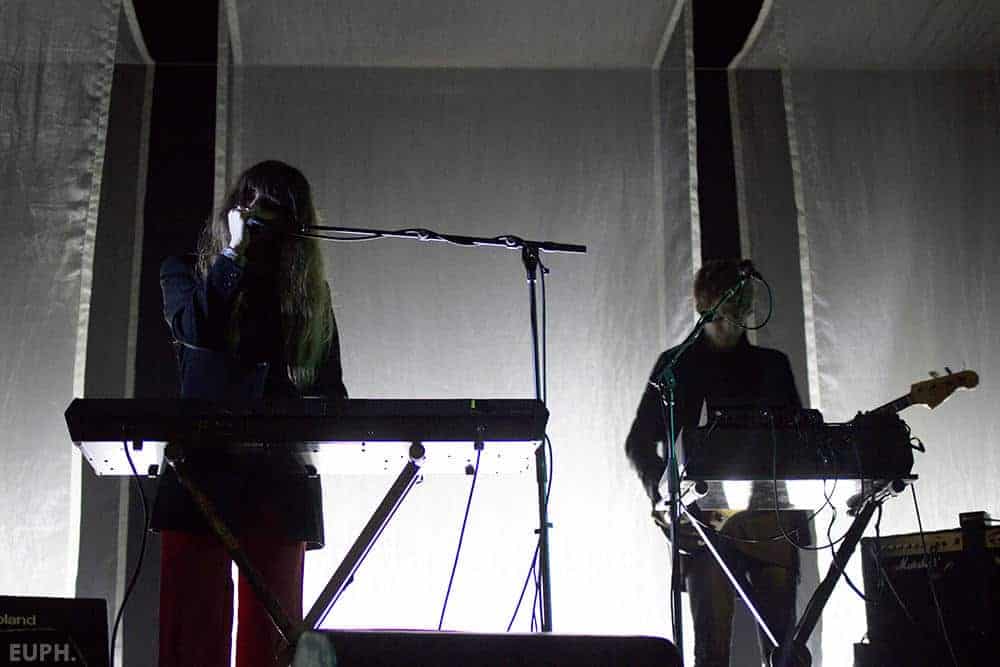 Beach House sent the Buckhead Theater and its inhabitants into a trance last night in Atlanta with their indie dream-pop sound and Victoria Legrand’s emotive vocals. Legrand stared into the mass of people with her long hair in the face and told her fans that she didn’t have much to say, because she could just feel a strong connection between them and herself. The feeling was clearly mutual as the audience in the sold out show shouted their love for French-born Legrand and Baltimore-based guitarist Alex Scally. Between songs and even after leaving stage the audience encouraged the band to give them all that they had, and even as the band left the stage, knowingly for only a moment, the theater roared with applause anxiously awaiting an encore.

The Baltimore-based duo was accompanied by a drummer and bass player which made the sound fuller, rattling the hearts of fans from the floor to the balcony. Opening for them was LA “freak” folk singer/songwriter, Jessica Platt. Her mellow sound and strange, yet beautiful, mouse-like voice calmed the atmosphere with which she engaged the audience. However, the melancholic mood of her music was simultaneously pleasing and serenading the audience to sleep. The venue was charmed by her acoustic melodies, but was ready to be energized by the time Beach House approached the stage.

The stage was set for a unique performance with three sheer rectangles behind the set, illuminated with lights and projected images. The artistic band played as silhouettes for the first half of the concert, their faces in shadows, which set the mood and allowed the audience to truly indulge in the music.

Beach House followed suit with switching up the song order at almost every show on their international tour so far. At least half of the setlist was devoted to the latest album Depression Cherry, released on August 28 this year, and fans anticipated and knew every song from it, a luxury many bands pray for and are often met with disappointment. Newer songs like “Levitation,” “Space Song,” “Beyond Love,” and “Blue Bird,” easily meshed with old tunes from their Bloom album, as well as “Master of None” from their 2006 self-titled release, and “Heart of Chambers” from Devotion.

Once it was truly time for them to go, the people of the quaint venue were amazed, musically satisfied and most likely thinking about playing Depression Cherry on their way home to get more of that Beach House dream drug. I know I was.