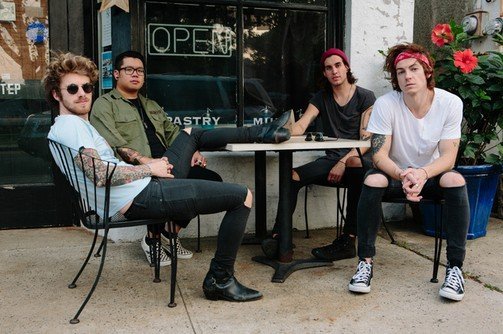 New Jersey boys, Young Rising Sons, have released their official video for “Fucked Up,” and it’s the definition of a good time. It’s no surprise, though, because you can always count on them to come out with something fun and energetic.

At first glance, the song gives off a strong feel-good vibe. It is about a couple of drunk misfits who love each other regardless of their fuck-ups. The video follows the guys on a typical night on tour. Flashing lights, energetic singing, fans cheering, and close-up shots of the band make the video aesthetically fun. Everyone is shown having a good time and smiling, and it really portrays the importance of being young and having fun while you still can. The song and video teach us that it’s easy to be carefree and in love when you’re young, and that’s a beautiful thing to take advantage of.

Although the concept of the video is well-known and done by many other artists/bands, fans can always count on it being enjoyable. You can’t go wrong with a video like this. It really allows viewers to feel as if they were experiencing in on the fun, which is a brilliant way to showcase themselves and appeal to new fans.

The track and the video are both simple, and that isn’t necessarily a bad thing, as the saying goes “Less is more.” These Young Rising Sons certainly have followed that saying perfectly.