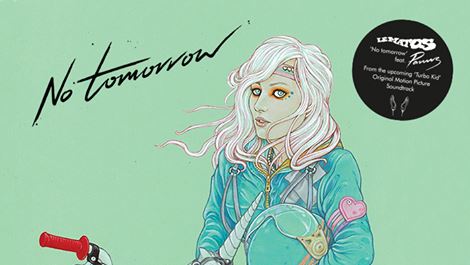 “Go anywhere you wanna go. Do anything. You know I’ll always follow. We will fight until there’s no tomorrow.”

At a first listen, the song sounds very animated, as if it were made for an episode of Sailor Moon, but it isn’t. The synthesizers make the song stand out and PAWWS’s vocals really make the track dreamy, fun, and colorful. When I first listened to the song, I wanted to do a happy dance because the song was just so catchy! It’s interesting because it starts out sounding pretty futuristic, yet it has obvious 80’s undertones against the pop sound. Although “No Tomorrow” oozes an innocence that makes listeners feel alive, the film it’s affiliated with is just about the opposite. The song is featured in the upcoming action-adventure film “Turbo Kid”—which is set in a post-apocalyptic world. The juxtaposition of the song and movie are a great, as the upbeat song and soundtrack lift the disturbing and gruesome gore to something more whimsical and not scary. The song choice makes the movie (which gained recognition at the Sundance Film Festival and SXSW) lighthearted , and distracts movie-goers from taking the bloody parts too seriously. The song allows fans to feel pumped up for the film, which is a difficult task to achieve sometimes. I can only hope the soundtrack will sound like one big dance party just by watching the trailer. “Turbo Kid” pays tribute to 80’s culture and films, and this track pairs well with the theme. It’s a modern twist to the 80’s, and definitely acts as a sample for the highly anticipated original soundtrack.

LE MATOS and PAWWS are energetic, vibrant, and fun people, so there’s no doubt the soundtrack and “No Tomorrow” would emit the same qualities. If you’re feeling the 80’s pop vibe from these radical folks, check each of them out on Spotify. As we wait for the full album release, “No Tomorrow” is available for purchase on LE MATOS’s Bandcamp site, and for streaming on SoundCloud.