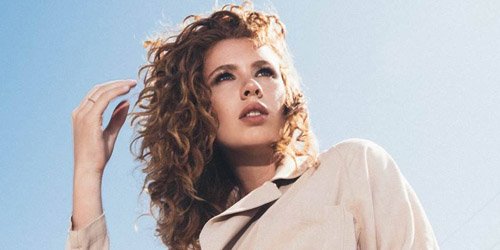 “I couldn’t be more turnt when I am over here, just dancing with my girls, we’re knocking over chairs and ripping at our shirts, getting so slizzard while we dishing up this dirt and we don’t care if we’ll be seen.”

In 2014, Grace Mitchell wowed listeners with her pop songs like “Your Design” and “Runaway” from her debut EP Design. Now the Oregon-native is back with a new sound in her newest hit, “Jitter” from her EP Raceday.

The song opens as if you are expecting a song that could resemble one from Your Design until it drops into a hip-hop beat sputtering “jitter” at the 17 second mark. The song is electrifying. With electronic beats mixed with pop you get a gritty sound that will makes you feel as though you’re dancing in a sweaty nightclub. Using words like “turnt” and “slizzard” as well as singing French in between, it’s clear Grace Mitchell is having fun and owning her new style. What makes her standout is that her music doesn’t come off as trying too hard. It is a different kind of pop that resonating with listeners and quickly gaining her the popularity she deserves.

If you are a fan of the mature vocal stylings of Lorde but want a little bit of flair, Grace Mitchell is your girl. We at EUPH. are excited for her and can’t wait to see what she does next.