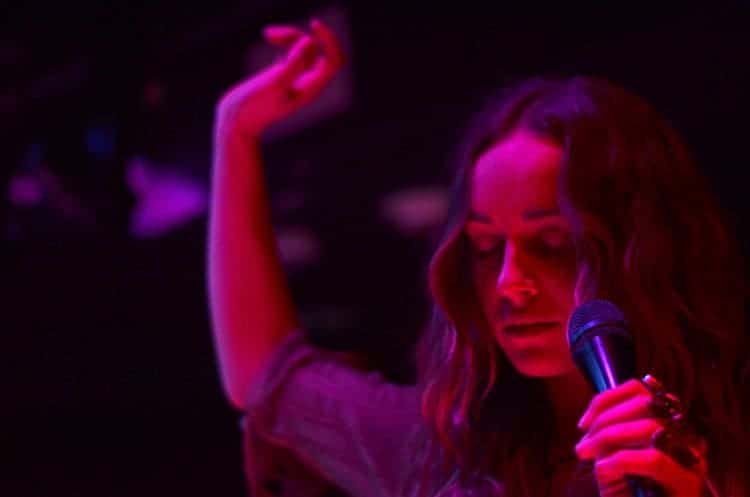 Her stroll through the stunned crowd standing in Zanzabar, that dons a reputation as one of Louisville’s oldest neighborhood gems and an award-winning, intimate live-music venue for both local and popular musicians. Anticipating her arrival at 8:30pm, Zella Day, a queen of sultry, dreamy pop, started her first performance in Louisville, KY, after the Louisville-native Brooks Ritter performed a half hour set with a setlist of original hip-swinging tunes like “Oh, Yeah.” As a valued opener proving a perfect fit for Zella Day, Ritter pumped up the crowd from his first song “Between The Lines” to the end. The Louisville crowd expressed their excitement with Ritter’s tunes shouting “I know this one. I love this one!” Ritter invited all to sing along and the audience greatly participated while taking pictures of his setlist.

Around 9pm, the audience was craving Miss Day. Casually walking in from side stage, she wooed the sold-out crowd at first sight. She opened with the very catchy “Jerome.” In the tune, she recalled the memories of an unrequited love with the lyrics “Blue dress, satin black taking every piece of my soul. Blue dress, faded black look me in the eye as they close. Jerome, Jerome. Why you treat me so cold.” Each instrument is heard strongly in the track and allows the relatable connection Zella puts for her listeners.  The album opener pushes its passion into its listener. Jerome is bad for her and her growth, she must pull away from never knowing him but there is such love that she for him and you can feel it through her voice on stage and on the track of the album, Kicker. Charismatic, Zella plays with the circling, array of neon lights and glows. In between songs she talks about her Arizona roots. Zella is the type of musician you’d wish to have a pizza slice with and converse over the latest obsessions and fashion trends.

Her fringe jacket sways with her long tresses in “1965,” one of many of my favorite songs on her album. A sweet love song about nostalgia. A song that easily compels one to think. My favorite lyric that I’ve actually tweeted once when the single released, “I felt forever when I laid upon your chest. Forever when you said I looked my best” which delivers her feelings on how she missed how close they once were and how he made her feel so special when she was vulnerable or rather scared to let him know her. The lyrics are heavy, citing that she doesn’t belong in the present where she is now without his company.

Personally, she is the bohemian version of my favorite artist, Lorde. Comparisons to other artists are always likely, but Zella is one to hold her own ground and feeds her majestic appeal to the audience. She goes forehead to forehead with a front row audience member, sings and looks into fan’s phones recording her, waves out the microphone to sing verses and more. “Sweet Ophelia” and “East of Eden” are rightfully so such great singles that released last fall. The production of “East of Eden” is exactly I’ve ever imagined. The first song I listened to when discovering Miss Zella last fall. The bass, drums and keys transcend into her light, dreamy soothing voice.

Released single, “Hypnotic,” and “Mustang Kids,” are definite album highlights that should already be in your “favorites” playlist. Zella Day leaves you feeling sublimely happy. Zella Day is a living dream and artist to not just watch, but admire and listen to over and over again.