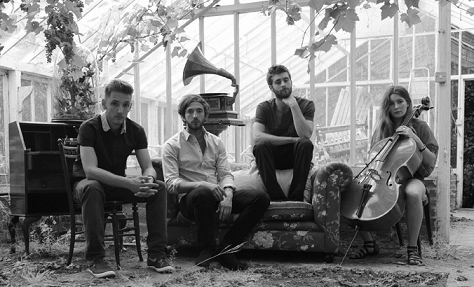 Passport To Stockholm – All At Once

Passport To Stockholm release new EP, All At Once, today and straight off the bat you know just what a delight you’re in for. Within seconds, the opening and titular track, “All At Once”, bursts into a flurry of strings and throbbing electronica.

Despite only being together for just over a year, Barny (vocals), Tom (guitar/loop pedal), Mariona (cello), and Henri (beats) have jumped straight in and created a collection of four tracks worthy of ‘statement piece’ status. Their big sound is indicative of a group of musicians will plenty of confidence in what they’re doing – no doubt helped by the wealth of talent and experience they’ve worked with along the way such as Gordon Mills Jr. (Ed Sheeran, Newton Faulkner), Nick Atkinson (Gabrielle Aplin, Saint Raymond), Amy Wadge (Ed Sheeran, Lewis Watson) and Athlete’s Carey Willets.

“Chemistry” carries through with a grandiose soundscape although the tempo is dropped down slightly as the vocals become more sultry and forlorn. “Let Me Know” begins solely with percussion. It adds a different dimension on a record not short of texture with the song as a whole proving to be their most folksy offering. “Wanted It More” has a very anxious and energetic feel to it like the song itself is eager to burst into life and end the EP in a big way. It doesn’t deliver on quite the big scale it promises but it is by no means a disappointment and rounds off an extremely good record from the London-based quartet.