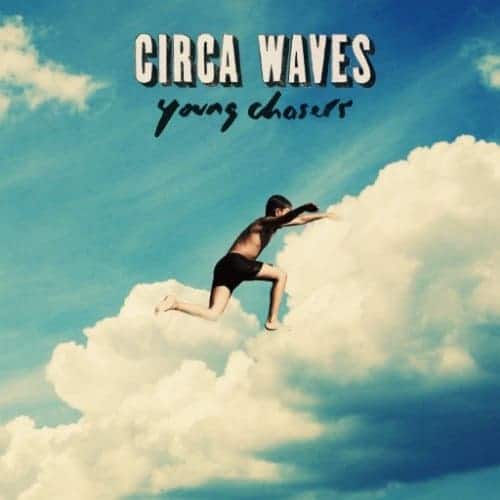 With the release of their debut album Young Chasers, Circa Waves have cemented themselves soundly in my summer playlist. On March 30th, the English band put out a record full of joyful beachy songs and while it might not quite feel like summer yet, this album is definitely helping to herald in the season. Fans of their earlier singles, “T-Shirt Weather,” “Young Chasers” and “Stuck In My Teeth” will not be disappointed as the Young Chasers album delivers some more catchy tracks along similar lines.

The album opens up with the accessible “Get Away,” featuring the bouncy choruses and guitar driven sound that characterizes much of the album. A change in pace comes with the track, “Deserve This” which blends a bit of an early 60s sound with their guitar pop rock and feels much more intimate than the rest of the track list. Singer, Kieran Shudall, told us exclusively in our interview in late October that “Deserve This” was his favorite off the album, coining it their “most laid back song.” Continuing to saying it was his favorite because they’re “so busy being God damn rock ‘n’ rollers all the time,” and that “It’s nice to lay back sometimes.” Highlights include the unabashed “Best Years,” the upbeat “Catch My Breath,” and of course the titular track “Young Chasers” which encapsulates all of the best teenage summer night vibes that Circa Waves has to offer.

While Circa Waves never stray far from their established sound, I never found myself hoping for something different. The band knows what works for them and seems to be sticking to it, which is not necessarily a bad thing at all– especially for the band’s debut album. Circa Waves aren’t breaking the mold, they aren’t going where no band has ever been before, nor are they creating intense lyrical genius. But they are making danceable happy tunes that are youthful, fun and free.

Just try to listen to “Young Chasers” and not smile, it’s probably impossible. Young Chasers is now available for purchase on iTunes here.