Little Comets – Hope is Just a State of Mind English band Little Comets are back with their third studio album, Hope is Just a State of Mind, which showcases their trademark “kitchen sink indie” style in the best light. With an impressive resumé of five EPs and now three albums, the Newcastle-based trio have established themselves as a band to be reckoned with.

Little Comets has always stood out as Britain’s answer to Vampire Weekend, drawing comparisons thanks to the similar style of vocals, guitar riffs and drum lines that run throughout their songs. Lyrically though, Little Comets win and songs like “The Gift of Sound” from their new album prove why. “Words that fall from stature / Do not enrapture / Chin feels like a chisel / Lost its fizzle / So hold me like a stranger / Absolve my danger / It’s the similarities / That bring me down.” The poetry in that opening verse is absolutely incredible, and the rest of the songs on the album are equally as well versed.

“Lyrically, I suppose the song is just about using language to engage on issues that are important to you,” the band said on their blog about the song “The Gift of Sound.” “…being inspired by the dearth of passion and truth in general politics or society to change things for the better. Just to keep on plugging away.”

A personal favorite off the new album is the titular track from their last EP “Little Italy,” as will be the case among many fans. Packed full of crescendos and unique vocal lines that makes it impossible not to sing along (even if you have no idea what is being sung). “Salt,” the seventh song on Hope is Just a State of Mind is one of the more original sounding tracks. It’s practically indescribable – the song takes you on a journey through different genres, and by the end of the song, you’re head bobbing along with the drums.

“The Blur, The Line & The Thickest of Onions” closes out the album, and as the most uniquely-titled song, it’s one of the best. Featuring dark undertones and beautiful lyrics, this song finishes Hope is Just a State of Mind on a touching note. 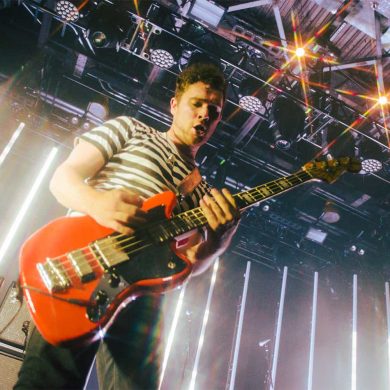