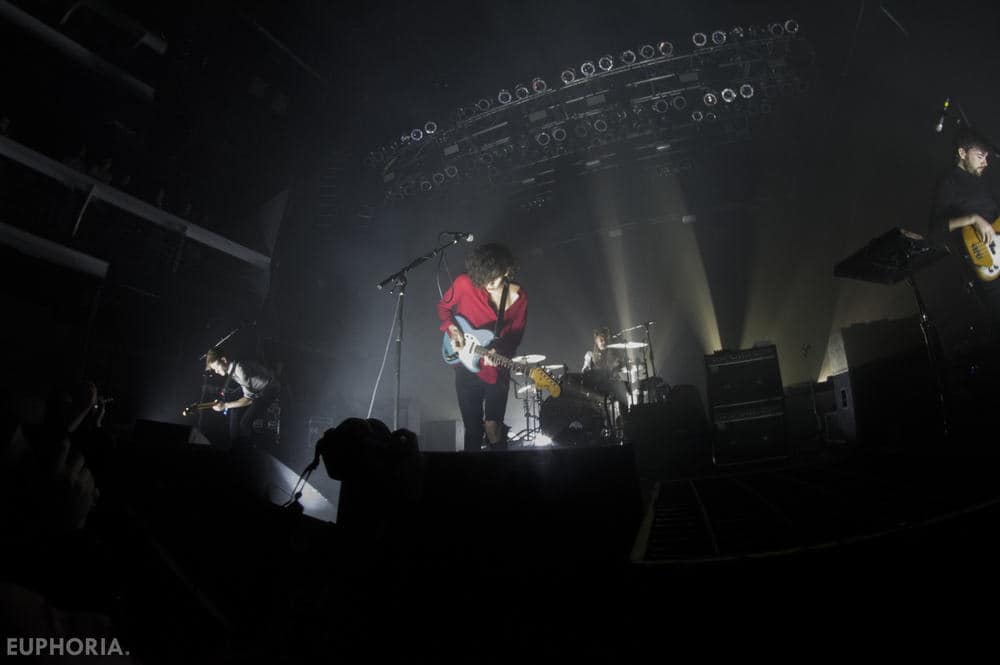 The 1975, one of the UK’s hottest bands, just performed two sold out shows at New York’s Terminal 5. When the band started touring in late 2012, they simply hopped into a van and starting performing wherever they could: bars, clubs, you name it. Now, two years later, the band’s debut album has hit #1 on UK charts, earned them a global fan base, and sold out shows around the globe. After touring for about two years, The 1975 are said to be on the home stretch, if even only for a little while.

The band has gained an incredibly passionate following, exemplified by the fact that some fans I spoke to had been waiting for their front row spot since ten o’clock the night prior. As a fan myself, I was excited to finally see their full live show. I had seen them at the 2014 Governor’s Ball, but according to friend’s experiences, their headlining shows are even better than their festival performances. I can now, after my own experiences, say that I agree.

The band set the mood with a fog machine before the lights dimmed, cueing the 3,000 fans to cheer for the British headliners. First came George Daniel (drums), then Adam Hann (guitar), Ross MacDonald (bass) and finally frontman Matt Healy (vocals and guitar) accompanied by his trusty bottle of red wine.

The band performed the majority of their debut album, with the addition of some older tracks and the live debut of “Medicine,” a track off Zane Lowe’s re-scored Drive soundtrack. This performance undoubtedly garnered the most shock factor for their fans. Something that’s been deemed a superior story to the band’s ability to put on a great show is Taylor Swift & Co.’s attendance. The hit maker, accompanied by Karlie Kloss, Lily Aldridge, and Martha Hunt sang and danced along to the band’s set. Shortly thereafter, the Haim sisters joined the party, prompting fans in the general admission area (who’d been keeping tabs on the pop singer) to freak out.

Overall, the band put on a fantastic performance, demonstrating that they’re equally talented live and recorded. I personally can’t wait until their next stop in New York. If you’re even slightly interested in The 1975, go to a live show. You’ll be won over by their genuine talent. Until then, check out our photos above and their latest live music video for “Girls” below.